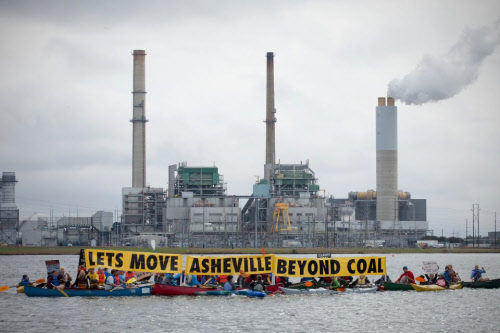 “Duke Energy’s Asheville coal plant is the largest source of climate-disrupting pollution in Western North Carolina,” says Beyond Coal Campaign Director, Mary Anne Hitt, who is a featured expert in the episode.

“The climate changes when it is forced to change, and now humans are forcing it to change far more rapidly than ever before,” says Joe Romm, Ph.D., Chief Science Advisor of the Years Project. “Past climate change reveals that our climate is very sensitive to carbon dioxide. Levels of CO2 in the air have increased 40% over the past 150 years, mainly from the burning of fossil fuels, which has warmed the planet more than it has in thousands of years.”

The City of Asheville, responded to community concerns in 2013 by unanimously passing a clean energy resolution. North Carolina also boasts the second largest solar growth in the nation.

Still, there is a lot to be done.

“I began this project as an environmental activist, and person of faith, concerned about climate change,” says Joyner of her experience filming. “Having immersed myself in the science and human impacts of climate change for more than a year, I know now there is nothing more worthy of my dedication.”

To learn more about this Years of Living Dangerously episode and take action, visit http://content.sierraclub.org/coal/asheville.

Dayna Reggero devotes her time to working for all that is good, socially-responsible, and sustainable. You can connect with Dayna at DaynaReggero.com.