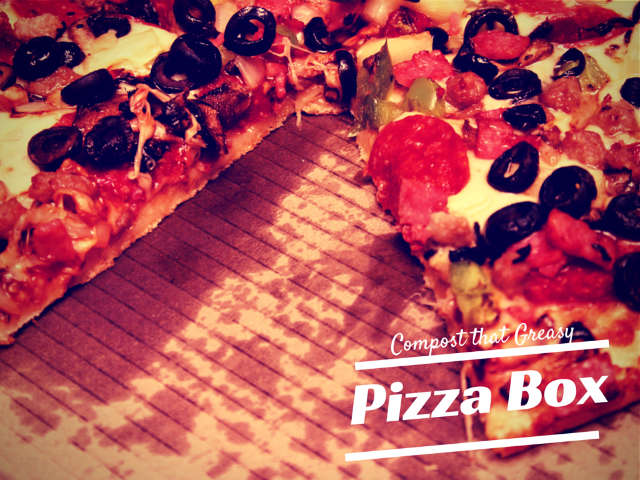 Back when I was in college in the 80s, we had a “green” way of dealing with aluminum can waste (which I assume was and is item most disposed of on campus): we noticed our custodian collected them for recycling, so we set up a box for him – no digging through the trash in our cube! When it came to what I assume is the second-most disposed of item – the cardboard pizza box – we simply threw it away. Even if we’d had a recycling system on campus, the pizza box would’ve still gone in the trash because of the grease that seeps into the cardboard and contaminates the material.

So, is the trash can the best option for pizza boxes? Or, do we just need to redesign it? That’s a possibility, but for most of us who enjoy a carry-out or delivered pizza every now and then, a third option is probably the most eco-friendly: composting. No matter how greasy it gets, that cardboard box makes great brown material for your compost bin. That’s why the sustainability programs at a handful of university campuses have instituted the Pizza Box Project, which keeps that ubiquitous trash out of the landfill.

While they’re not the first to implement the program, the students and officials at North Carolina State University have certainly set up a very successful Pizza Box Project. Implemented in February of this year, the school’s Office of Waste Reduction and Recycling claims that the school now composts “an average of 370 tons of year.” The dumpsters with pizza logos on them joined an existing composting program focused on the organic waste coming out of university dining halls. A few other schools engaged in such efforts include Michigan’s Grand Valley State University, and Miami University of Ohio.

This idea is just smack-my-head simple: at least in NC State’s program, there was no need to set up composting facilities, as a local company deals with the waste after it gets disposed in one of the program’s dumpsters. It really just required a little commitment and planning, and is showing big results in just over six months.

Know of similar programs at schools not mentioned here? I have no doubt that, in a year’s time, we’ll see many, many more campuses involved in pizza box composting…