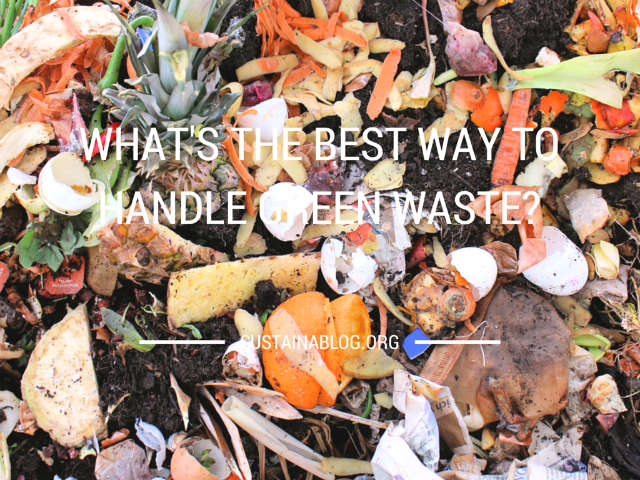 In Tulsa, Oklahoma, green waste is very much on the political agenda. According to Tulsa World, the city’s trash board voted this week to pursue a plan to collect and incinerate it rather than invest in an active composting facility. Proponents of the composting plan are deeply disappointed by the vote.

City Councilor Karen Gilbert says, “That [vote] sets us further back from the original plan of having an active composting, mulching facility,” Gilbert said. “It’s frustrating that we start off with an investment, but then we don’t follow through with the priority of that investment.”

Those in favor of the incinerator approach complain that the city can’t afford the cost of the proposed composting facility and that is costs too much money to separate out the green waste from the rest of the city’s trash. Doesn’t it seem as though the situation in Tulsa is a microcosm of the entire “global warming/climate change” debate going on around the globe?

Green waste consists of two components: yard waste, such as leaves and grass clippings, and food waste. Disposing of them requires different strategies but taken together, they account for a significant proportion of all the waste going into US landfills every year.

According to GreenWaste.com, about 75% of solid waste is recyclable, but at present only about 30% actually gets recycled. 21.5 million pounds of food waste gets sent to our landfills every year. If that food waste were composted, the reduction in harmful emissions into the atmosphere – mostly methane – would be equivalent to taking 2,000,000 cars off the roads in America.

In Washington State, a local prison is vermicomposting all its food waste and saving about $8,000 a year in disposal costs. The compost then gets spread on the prison gardens to help grow food for the kitchen. At North Carolina State University, an ambitious program to collect and compost empty pizza boxes is on track to process more than 370 tons of the containers in its first year. And in Massachusetts and Seattle, new laws mandate composting of food wastes.

In Sweden, 99% of all trash is recycled, composted or burned. Sweden does not have the amount of open available land needed for large landfills. It also does not have the abundance of natural resources that the United States does. So it operates a number of large incinerators that provide electricity and heat for government buildings. Critics say that burning only adds pollutants to the atmosphere, but that nation’s political leaders maintain that modern technology removes virtually all of the harmful emissions and the electricity generated goes a long way towards meeting Sweden’s power requirements.

The best conclusion to draw from all this is that local needs will govern how trash – particularly green waste – gets handled by various communities. There is no “one size fits all” solution. One could argue that Tulsa is taking the easiest way out and looking only at short term costs versus long term benefit. But the real answer is provided by Göran Skoglund, an official with the municipal power facility in Helsingborg, a city in southwest Sweden. He says he hopes the supply of waste to keep the city’s incinerator going will disappear. “This sounds strange…[but] that would be great for this planet. It’s not sustainable producing the amounts of garbage that we do.”

And that’s the take away from this story. Ultimately, it is not about burning vs. composting vs. recycling. In the end, it is about reducing the amount of waste that people generate. That’s where the focus of the political debate about waste products should be.