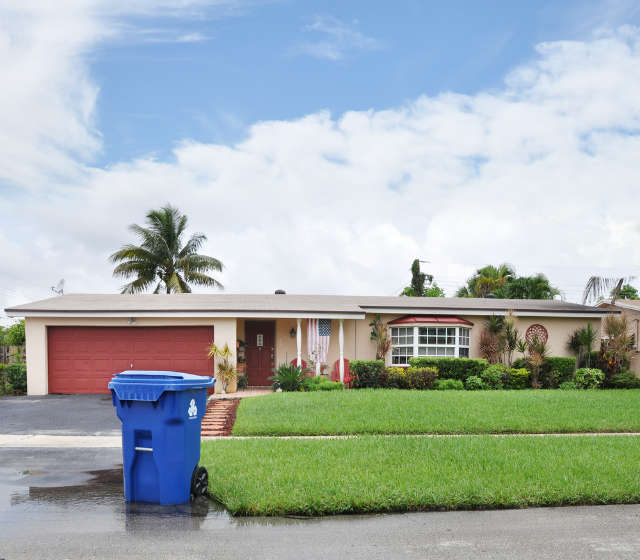 Recycling reduces the need for expensive landfills, keeps plastic and toxins from polluting our land and water, and conserves natural resources that make the things we use everyday. In short, it’s the right thing to do.

As of 2012, Americans recycled 34% of all their waste—more than three times as much as they did in 1980. But let’s face it: there are a lot of good things that are hard for many people to do in their everyday life. With demands at the office, chores at home and making time for family and friends, a drive to a recycling center often doesn’t fit into the schedule.

That’s why curbside recycling is so important for keeping the recycling rate on the rise. Cities from Seattle to Austin to Washington D.C. are diverting huge amounts of waste from landfills. San Francisco leads the pack, achieving a record-breaking 80 percent recycling rate in 2013. What do these cities have in common? Blue bins, right next to every home’s trash can.

With all the pressing issues facing communities around the country, where we throw our empty milk cartons may not trickle to the top of city councils’ agendas. That’s where you, your neighbors and other environmentalists in your community step in, to make your issue the City Council’s issue, too. The pressure works: thanks to years of work from civic groups, in September, Houston, Texas—not known for its environmental leanings—voted to vastly expand its recycling program. By next month it will reach 90,000 more homes, increasing its recycling rate by eight percentage points.

Now that the 2014 election season is over and new officials are getting ready to take office, how can you get their attention to make sure that providing easy, one-bin recycling gets a vote? Here are a few things you can learn from some everyday citizens-cum-activists around the country who are making changes in their hometowns:

Do Research And Find Success Stories To Back Up Your Plan

The good news for recycling advocates: you’re not trailblazers. While your community may not have access to curbside recycling, a lot of places do, and they can serve as useful examples both for how to design a program and how to convince city leaders to make it a priority. Every community has it’s own unique story. A 1989 California law required local governments to divert 50 percent of their waste by 2000. In Missouri, the goal was 40 percent diversion, which has been revised over time as circumstances changed. Many states have local recycling organizations that can offer their wealth of knowledge about successful campaigns and recycling models near you.

Knowledge is power. The first step to any successful advocacy campaign is to let people know there is a problem, and that you have a solution. Nancy Lewis of Canaan, Conn. was appalled when she found out her local Dunkin’ Donuts store trashed all their extra baked goods every day, rather than letting employees take them home or donating them to a nearby food bank. She created an online petition, and through sharing this knowledge, inspired more than 16,000 to voice their opposition to trashing food while people go hungry. Many recycling supporters in your community may not know what options exist or how to make a change. Arming them with knowledge sets the stage for a successful campaign.

The Golden Gate Bridge is the Bay Area’s most iconic landmark and draws thousands of visitors every day who walk and bike across the span to take in spectacular views of the San Francisco Bay. These thousands are all potential people who may be willing to protect it.

In October 2014, the Golden Gate Bridge Highway Transportation District Board of Directors voted to continue exploring setting up tolls for pedestrians and cyclists. San Francisco resident Julie Mastrine worried that this would make it hard for low-income folks to visit the bridge and increase car traffic. In less than two months, 35,000 people signed her petition. By using an online format, Julie not only reached San Franciscans, but tapped into the global network of tourists, Bay Area ex-pats, and other potential visitors who want to keep the bridge free for pedestrians and cyclists.

What’s more, she did it quickly. While government can often seem slow, when decision time comes, it’s critical to have your support lined up and ready to go. That means when the Board of Directors meets again, she’s already got her ammunition to show them that people won’t tolerate the toll idea. You can do the same in your community. Even if you know a City Council vote isn’t imminent, get your neighbors to voice their support for recycling now so you’re ready when the time comes.

Take It to City Hall

Nine-year-old Spencer Collins of Leawood, Kansas is an avid reader and wanted to share his love of books with his neighborhood. He created a free lending library where neighbors could borrow and share books from a free-standing shelf in the Collins’ front yard. After receiving a couple complaints, the city determined it violated building codes and demanded the family take it down.

Rather than just comply, Spencer fought back. Standing on a milk crate at a public meeting a few weeks later, he pleaded his case to the Leawood City Council. Bolstered by an online petition with over 22,000 signatures, the Council saw the community wanted little lending libraries protected. They voted unanimously to exempt these little libraries from the city code and are considering extending permanent protection.

Spencer’s story offers an important lesson: once you have your community support lined up, nothing beats showing up in person. Most cities and counties are required to post notices about public meetings and allow opportunities for citizens to speak up on issues they care about. When people show up, they listen. A 2011 survey of congressional staff by the Congressional Management Foundation found that in-person issue visits and contact from a constituent who represents other constituents were the most effective ways to influence an elected official. For recycling advocates, that can mean not just showing up to council meetings, but meetings at the Department of Public Works, the Planning Department or other city agencies and commissions that have influence over waste disposal. Advocating on multiple fronts increases your chance of finding allies and making recycling a top priority.

Keep Up the Pressure

Change is slow and incremental, and sometimes, winning once isn’t enough. After the Taos, New Mexico farmer’s market moved to the town’s historic square, there was a small outcry from a few nearby business owners who didn’t like the new competition. It seemed like this small minority was going to get its way with City Hall, until a citizen stepped in. Nyna Matysiak circulated a physical petition in her community asking people to stand with the farmers’ market. But with the city council looking to shut it down before the end of the season — and denying community members the chance to voice their support during a public meeting — Matysiak created an online petition to gather signatures faster. She delivered more than 600 to city hall. Faced with hard evidence that the community supported the farmers’ market, the city backed down and allowed it to stay open through this season.

But that still leaves next year’s farmers’ market in limbo. This time, Matysiak isn’t starting from scratch. Thanks to her work this year, she already has a network of several hundred community members who are ready to take a stand to protect the market.

Like the Taos farmers’ market, winning a push for curbside recycling often requires ongoing battles. Whether that’s extending recycling pick up to new neighborhoods or moving to single-bin collection, once you have your coalition and network, keep up the fight. Over time, a lot of small victories can equal a massive change.

Winning advocacy campaigns isn’t easy, but today there are lots of tools and tactics you can use to encourage your elected officials to make recycling a priority. Combining the power and reach of online petitions to rally supporters with forceful in-person appeals shows the powers that be that the community stands with you and the blue bins. But more than the tactics, winning a recycling campaign is about building a network of supporters that understand the needs and constraints of your community and are willing to act when the time comes.

Nathan Empsall is a Senior Grassroots Strategist for Care2. He works with citizen authors on The Petition Site to create successful petitions . Prior to joining Care2, Nathan worked for Barack Obama’s email team, and the Sierra Club’s digital team. In addition, he is a founding member of SierraRise, was the National online organizer for the Beyond Oil Campaign, and has helped promote green transportation solutions like electric vehicles. Nathan currently resides in Washington, DC.