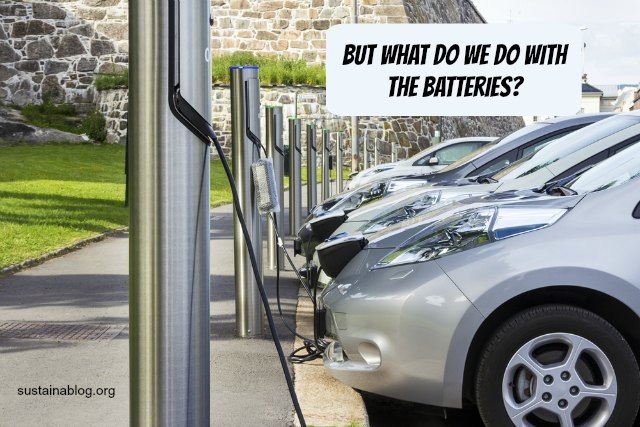 In an attempt to reduce carbon emissions, American policy makers set out to have one million electric plug-in vehicles on the road by 2015. While the environmental benefits of electric and hybrid vehicles are clear, they do come with certain challenges. By far the biggest challenge is figuring out what is to be done with the electric plug-in and hybrid batteries after they are finished being used.

The good news is that, according to Joseph Acker, the President of Retriev Technologies, a battery recycling company, “All car batteries can and should be recycled.”

The most important component of vehicle batteries is lithium. Lithium is already in high demand as it used in rechargeable batteries for laptops, mobile phones, and digital cameras. In 2015 the estimated demand for Lithium is 138,500-265,000 tons and in 2020 the demand may reach 175,000 to 500,000 tons, with most of the demand going towards batteries.

Currently the majority of the world’s supply of lithium comes from Bolivia, Argentina and Chile. While recycling batteries to extract lithium makes perfect sense, financially it is not worth it since the cost to recycle the lithium exceeds the cost of mining new lithium.

Most of the value in recycling car batteries comes from the amount of nickel, cobalt, iron and other metals for reuse. Mr. Acker explains, “the difference in battery values depends on the nickel and cobalt content. There is a trend where manufacturers are trying to reduce the amount of nickel and cobalt in batteries but this trend is reaching a lower threshold based upon performance.” The manufacturers are trying to reduce costs but if this results in inferior batteries they could be forced to change their ways.

While most of the batteries are made with Lithium, not all electric plug-in and hybrid batteries use it. Many early hybrids like the Toyota Prius, Honda Insight, and Honda Civic hybrid run on a nickel-metal hydride battery. The NiMH battery is a better alternative to lead since it is lighter weight and can store more energy. That said, NiMH batteries do have their disadvantages including a high rate of self-discharge. Also the cadmium in the batteries is toxic and can’t be put in landfills so they’re seen as worse for the environment.

Most consumers that drive a hybrid or electric vehicle care greatly about the environment so it’s important to ensure that the battery is disposed of properly. For consumers that see their vehicle until the end of its life, what options are there for the battery? The battery should not be sent to a random scrapyard to be recycled, as the parts need to be processed properly. Throwing away these batteries is not an option as they can be hazardous and cause pollution. If an electric car battery is mishandled it could be a potential fire hazard or give off a shock.

In order to ensure that the battery is disposed of properly, Mr. Acker says, “ The likely place to dispose of an electric battery is the manufacturer’s dealership (if the vehicle still has life remaining) and an auto salvage yard (if the vehicle has reached end of life.  The best place to dispose of an electric battery is Retriev Technologies, the only Li Ion Battery Recycling Facility in the USA.” In Japan, Honda developed a process where customers can drop off their used batteries to dealers and rare metals are reused in new batteries.

Once they’ve been used, the batteries only retain about 70-80% of their original capacity so while this is not enough to use in a vehicle they can still find other uses. The US Department of Energy awarded $9.5 million to Toxco in order to build the first recycling facility for lithium-ion car batteries. Major electric car battery manufacturers such as Tesla have already begun to send battery packs to them.

The car manufacturers are also looking into aftermarket uses of electric batteries as well. Nissan is working with Green Charge Networks to sell a mass-market energy storage system built on Nissan Leaf batteries. General Motors is also pursuing a similar plan where they will use Chevy Volt batteries to help power the General Motors Enterprise Data Center. The batteries will work in conjunction with the wind turbines and solar array while also providing a source of back-up power is need be.

As hybrid vehicles become more prevalent it’s going to become more important to find safe and environmentally friendly ways of disposing of the car batteries. Given that the average life of an electric car battery is about ten years, we’re about ten years away from needing solutions to dispose of one million car batteries with millions more to come.

Paul Nadjarian is the Founder and Chief Executive Officer of Mojo Motors. His extensive background in the automotive industry includes running the Parts & Accessories category at eBay Motors, the Internet lead management group at Ford Motor Co., and co-founding GreenLeaf Auto, an auto-recycling venture within Ford. Mojo Motors features vehicles for all types of buyers, whether they are looking for a Dodge Ram 1500 in New York or a Chevrolet Impala in San Francisco.