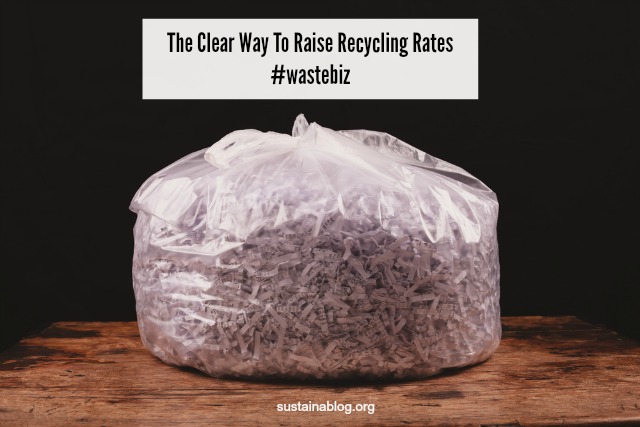 Municipalities and waste companies have tried all sorts of tactics to raise recycling rates. Single-stream recycling – no separation of materials – and curbside pick-up are among the more popular means of attempting to increase participation; experiments like pay-as-you-throw also aim to boost the amount of recyclables reclaimed. But Halifax, Nova Scotia tried an even newer idea recently: shame.

That’s the basic concept that underlies the Canadian city’s new requirement that residents put most of their trash out in clear plastic trash bags. If your neighbors can see that you’re not separating out recyclables like paper and aluminum, they might say something… or, at the very least, they’ll know that you aren’t willing to make a minimal effort on this front. Trash collectors will also be able to see these materials, and refuse to take bags that contains things that shouldn’t be there.

Some might argue that if you’re not willing to separate out organics and recyclables, you probably don’t care what the neighbors think, but the initial numbers don’t support that: in the two months the system’s been in place, the amount of trash collected has dropped by about 30%… and recycling rate are up. Officials emphasize these are very early numbers… but they’re definitely encouraging.

Of course, this won’t work everywhere: cities and towns with dumpster-based trash collection, or with cans designed for trucks with robotic arms, wouldn’t be able to take advantage of either the shame factor, or the collector refusal. But in places where residents put trash bags on the curb for manual pick-up, this seems like a smart approach.

Would this approach work in your city or town? Got other innovative ideas for boosting recycling rates? Share them with us in the comments.

Also from the waste space:

Nestle adopting How2Recycle label: Nestle-Purina isn’t a company that gets a lot of love from greenies, but there’s some good news from the food giant this week. The company plans to start using GreenBlue’s How2Recycle labels on many of their products in upcoming months.