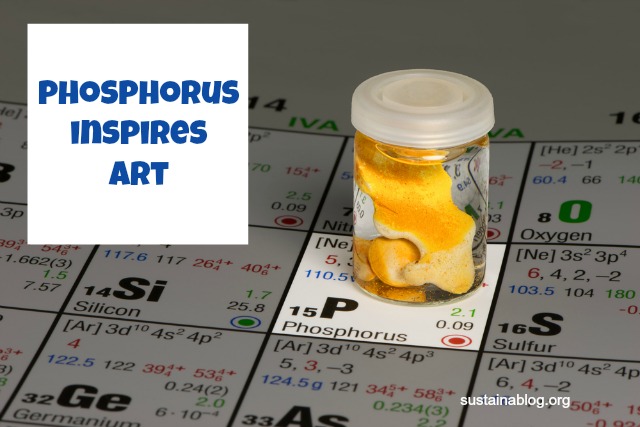 Several years ago, agricultural scientist Steve Savage listed “peak phosphorus” as one of ten existential threats to global agriculture. In short, phosphorus is critical to growing food – nitrogen’s the only element that’s more important – but we’re wasting it. Not only do we use it in fertilizers, but also soaps and detergents, and even pesticides. Our level of waste has hit a critical juncture: very few sources of phosphorus rock are left. If we’re going to stave off an agricultural crisis, we not only have to make much better use of what phosphorus we have left, but we also have to start recovering it from wastewater and waterways.

That’s an expensive proposition, but one that’s already underway: Chicago, for instance, has started the process of recovering phosphorus from wastewater, and turning it into fertilizer. This month, that process will be the subject of an art exhibit tied to Chicago Artists Month, and available on your nearest smart device. With the installation of a freely-available app, you can watch artistic renderings of nature doing its thing with this element. Among the processes in the Cycle P15 exhibit you’ll see:

The idea here, of course, is to bring the science of phosphorus waste and pollution to life for the average citizen… and perhaps even inspire them to get more involved in the conservation and reclamation of this important element. An official wrap-up event on November 13th will even feature a game tied the exhibit: think Twister meets Trivial Pursuit. Who knows, maybe we’ll get another activist greenie or two out of this effort…

The Cycle P15 exhibit is the first effort by sponsor Terracom Public Relations to address the new communications landscape by bringing artists and scientists together to address critical issues. As a part of the company’s 25th anniversary, Terracom will focus not just on executing communications projects, but also bringing together various stakeholders in new and perhaps unusual ways to shed light on these issues.

Remember when Bill McKibben suggested we need more artistic renderings of climate change? Yeah, that’s what we’re talking about here. Terracom principle Christine Esposito has been a friend and colleague for years, so I’ll be sharing these effort whenever they’re relevant…

Play around with the exhibit, and then let us know what you think.