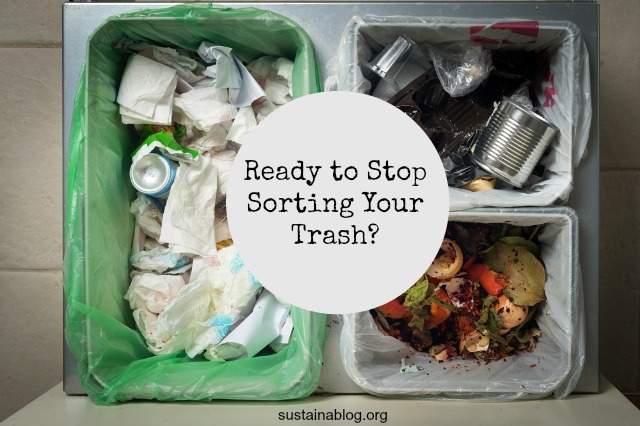 Many of us have engaged in some level of waste sorting for so long now that it’s hard to imagine anything else. But it wasn’t that long ago when we really used a single stream for waste disposal. Everything went into the trash can.  The trash can went out to the curb for pick-up. Nothing got separated out or sorted.

Maybe it’s time to return to this model?

Now, before you assume I’ve gone over to the dark side, I’m not actually suggesting going back to the “good ol’ days” of waste management. But I’m very intrigued by Medina County, Ohio’s proposed shift to a “waste mall” approach to handling residential and business trash. Everything would go to a central location, where, according to the Optiva Group‘s Edmund Kwiecien, it would be transformed “into recyclable materials, energy and new products…” So, while residents and businesses would return to the old practice of tossing all of their wastes into one receptacle, 70 to 80% of that trash would be put to further use rather than going to a landfill.

How does that happen? That’s where the “mall” concept comes into play. This single facility would house a number of different businesses that deal with different kind of trash and approaches to handling it. Optiva’s already lined up Quasar Energy Group (which produces energy from anaerobic digestion of organic wastes), and Sherbrooke OEM (a manufacturer of recycling equipment) to participate in the project, along with four other companies.

So, the trash would arrive, get sorted, and then shunted to the company that could make use of the material… all in one space. Kwiecien told county council members, “It never has to leave the building. It comes in as garbage and goes out as a product like a mailbox.” Other potential products include “plastic pellets, carbon to make ink for printer cartridges, mulch and oils.”

Not only does that deal with wastes in more creative and environmentally-responsible manners, but it could also produce lots of jobs. Kwiecien is convinced the county’s trash alone could keep one shift of workers busy, but that the facility would have the capacity to handle much more input. That would result in 50 to 100 jobs – not bad for a rural county.

While this concept reminds me of the old “industrial ecology” model – in which one company’s waste becomes another’s feed stock – I’ve never heard of waste management taking this form. No doubt, the residents of Medina County would love to return to a single stream approach to sending out their trash… and some would definitely benefit from the work that the “waste mall” could create. I’m intrigued. If you see red flags with this model, share them… this sure seems to me like a smart means of cutting some costs out of the current recycling model.