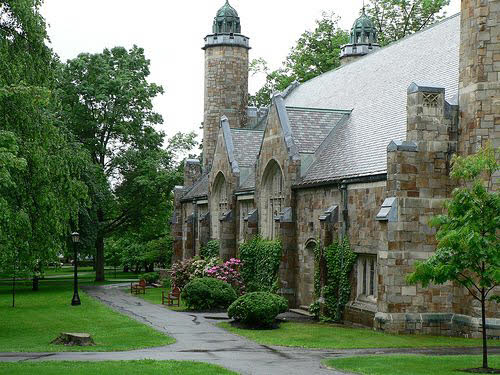 In many respects, the modern environmental movement was born in the colleges and universities that dot the American landscape. And that spirit and enthusiasm for green innovation continues to flourish today. But with all of the green claims made by government, the business sector and the mainstream media, it’s quite likely there will be some greenwash spilling from the windows of the the Ivory Tower.

To help us wade through all the green hyperbole, a growing list of sustainability ranking projects has emerged including the Princeton Review Green Honor Roll, the College Sustainability Report Card, and the Sierra Club’s just-released Cool Schools ranking. Each of the guides uses a different methodology but all of were helpful when formulating the following compilation of the top green colleges and universities in the United States.

Recognizing that defining the word ‘green’ can be problematic in its own right and that there are tons of colleges doing really great things in terms of sustainability, this list is certainly incomplete and/or inexact. Think we missed something? Have an example of campus sustainability that needs to be told? Tell the world in the comments section. In alphabetical order:

In 2005, Bates College signed a five year contract to use 100% renewable electricity (small hydro and biomass) to power its main buildings which account for 94% of the College’s electrical consumption. In the dining hall, 28% of the purchases are locally grown or sustainably harvested and dining services diverts an impressive 80% of its solid waste from the local landfill. Other cool programs at Bates include a ZipCar and bikeshare program.

The sustainability initiatives at Carleton College rank right up there with those you’ll find at the Ivies and other large, well-endowed universities. Carleton unveiled its own 1.65-megawatt wind turbine in 2004, the first of its kind in the nation. The school is also proud of its LEED-certified buildings and campus wide compost and single-stream recycling programs.

Named by Grist as the “Greenest college in the world,” College of the Atlantic earned that honor for a reason: because it was the first college to be a net-zero carbon emitter in the country. Since then, hundreds of other universities have made similar such pledges. Since the college opened in 1972, it has specialized in healthy, local and frequently organic eats. There is also a thriving campus community garden and a nearby organic farm, which is owned and operated by the school.

Image via College of the Atlantic

Evergreen State College maintains a thriving organic farm that produces enough food to have leftovers after selling to the campus food service. It also has a massive composting program in place, replete with a compost reactor, worm bins, and food-scrap collection at residence halls.

On track to become carbon neutral by 2016, Middlebury made steps toward their goal of becoming carbon neutral by 2016 by building a biomass gasification plant that replaces one million gallons of fuel oil annually with locally and sustainably produced wood chips. The plant generates steam for heating, cooling and electricity and reduces the college’s net carbon dioxide emissions by an impressive 40 percent. Middlebury is home to the country’s oldest undergraduate environmental studies program and currently is the home institution of resident scholar Bill McKibben, well-known climate activist and author of The End of Nature.

Also listed in the top tier of US News and World Report‘s annual ranking of colleges in the country, the Ohio liberal arts college has always been considered a little lot left of center. Sustainability is taken seriously at Oberlin including a wastewater processing system that creates reusable grey water via the natural cleansing methods that occur in a wetland. As part of Oberlin’s Buy Local program, about 35 percent of the total food budget is spent on items sourced from approximately 30 local farms and a local dairy.

One of the top five renewable energy purchasers of any university in the country, the UCSC Banana Slugs’ green power program is the result of a ballot initiative that was approved in May 2006 by the student body. UC Santa Cruz has even developed a sustainability vision statement which says the university will strive to integrate sustainability into every aspect of the three pillars of university education: research, teaching, and public service.

Home of the nation’s oldest student-run environmental center, established Earth Day 1970, and the nation’s first collegiate recycling program, established in 1976, the University of Colorado in Boulder has long been at the forefront of campus sustainability.

Image via University of Colorado

The first college to run off of a landfill gas cogeneration plant which covers 85% of heating, cooling and electricity, The University of New Hampshire also buys buy food from 54 local farms thereby supporting local farmers.

Image via UNH Office of Sustainability

The University of Vermont supplies 60 percent of campus power needs with renewable energy; composts more than 20 tons of waste each month. And when those frigid winter winds come blowing off nearby Lake Champlain, students and faculty are thankful they can ride free on biodiesel-powered shuttles.

Despite campus growth in the same period, overall energy use actually decreased at ‘U-Dub’ by 10 percent between 2000 and 2005. The university buys 100% of their energy from renewable sources, and has a hybrid and electric fleet of over 300 vehicles.

Home of the legendary School of Forestry and Environmental Studies, Yale has always been well regarded in terms of its academic programs in the environment and natural resource sciences. Enter the 21st century and Yale hasn’t lost a step. The Connecticut Ivy now has a forward-looking office of sustainability and publishes one of the best regarded environmental blogs on the internet.

The following colleges and universities were also repeatedly in the top tier of the green rankings.