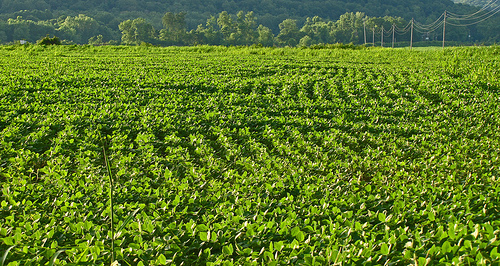 Farming is a unique industry.  Even though less than 1% of Americans are doing it, it is still an industry with hundreds of thousands of independent decision makers.  It is also a far more dynamic and adaptable industry than one might imagine.  A look at USDA crop statistics before and after 1996 demonstrates this point extremely well.

If you look at historical planting data for soybeans in the US, the trends change dramatically after 1996 (see chart above).  That makes sense because “Roundup Ready” herbicide tolerant soybeans were commercialized that year.  Since 1999, the vast majority of soybean acres have been planted to this GMO trait and there are now about 20% more of them.  These soybeans are very attractive to farmers because weed control is much easier and doesn’t involve the sort of plant injury that came with previous “selective herbicide” options.  It makes it easier to farm “no-till” which conserves water and uses less fuel. But it wasn’t just soy planting that changed in 1996.

Corn also became a GMO crop in 1996 with the launch of “Bt-Corn” which is resistant to the European Corn Borer, a serious pest in the Western Corn Belt.  Farmers started planting more corn, particularly after 2003 , but the area gain was not as significant as with Soybeans.  Glyphosate tolerant corn was added in 1998 and improved in 2003.

The Price of Precaution

But it wasn’t just the commercial GMO crops that saw a change. Spring wheat (used for high quality bread flour, pizzas etc) saw a dramatic loss of planting area, dropping a full 20% between 1995 and 1999.  Much of this was switched to soybeans and later to corn.  The spring wheat area has continued to decline and is now 40% below it’s peak.  That might not have happened to this degree if two biotech traits were commercialized early in this century.  Monsanto was developing a glyphosate herbicide tolerant wheat and Syngenta was developing wheat resistant to a disease call “Fusarium head blight.” These would certainly have helped keep spring wheat more attractive as an option for growers. But nervous customers in Europe and Japan put pressure on the North American wheat industry – threatening not to buy any North American wheat if any GMO wheat was commercialized.  The wheat industry gave in and asked Monsanto and Syngenta to shelve their biotech wheat programs – something they now deeply regret.  The wheat growers of the US, Canada and Australia have since agreed that they will do a simultaneous launch of any future biotech wheat so that the Europeans and Japanese cannot strong-arm them again.  But any such advance has been delayed by 10 to 15 years.   The GMO-pact countries are the producers of most of the wheat that goes to countries that can’t produce enough for their own needs (which includes Europe and Japan, but also the Middle East and many other areas rich and poor).  Considering how global wheat production is failing to increase as rapidly as global demand, the “Precaution” leveraged by rich Europeans and Japanese has insured that this “Staff of Life” will become very expensive for the world’s poor.

There Are More Forces at Work Than Technology

In the “Pre-biotech Era” soybean prices were rising at a modest rate which didn’t keep up with inflation. The graph above shows that between 1995 and 1999 the price growers got paid for soybeans crashed by almost 40%!  But then a new trend started where prices were rising at ~10% per year. Actually this same price trend has occurred for all the major and minor crops (corn, spring wheat, winter wheat, durum wheat,  barley, silage corn….).  This can’t be explained by the introduction of GMO crops alone, although the drop could be related to the delays in regulatory approvals in Europe that disrupted trade. This cross-crop phenomenon  is probably driven by the “Freedom to Farm Act” of 1996, passed by Congress.  It wasn’t really an end to government interference in these markets, but it was a change in the way the government distorted the market via farm policy. This complicates the analysis of US row cropping trends. They are driven by a complex mix of biotechnology, increased private investment in the breeding of some crops and not others,  ethanol “blender credits” and tariffs, and the effects of grain subsidies.  Many people assert that the US has a “Cheap Food Policy,” but if that is what was intended, it is clearly not working!  Oh, by the way, the grower’s are not getting rich on this new trend.  These commodity price increases end up driving up land rents so the money is flowing to the land owners (former farming families and land speculators.)

Since the introduction of biotechnology, the rate of yield gain for corn has increased by a factor greater than two.  Some of this is from the traits themselves, but it also involves the more sophisticated seed treatments that are now applied to the very valuable seed and the increased investment in breeding (e.g. Marker Assisted Breeding).  In years like this with high commodity prices (e.g. as in 2007/8) farmers will also apply fungicide and/or insecticide sprays that are now easy to “pencil” adding several more bushels to their yield.  Opponents of GMO crops mistakenly linked the increased chemical use in 2007/8 to biotechnology when it was simply a function of economics.

The soybean yield trend shows a “lag” after the introduction of biotech and then a similar but slightly slower rate of gain.  This is mostly because of the expansion to areas that were not traditionally major soy producing sites and the lower yields of those regions due to colder temperatures (Northern expansion in Minnesota and North Dakota) and lower rainfall (Expansion to the West).

Spring wheat yields are always highly variable because it is mostly planted in more marginal land, but there has been a distinct acceleration of yield gain for this “orphan crop” that didn’t get to be improved by biotechnology.  What has happened is the farmers have “intensified” their production of the spring wheat that is still grown.  This involves using “certified seed” grown specifically for that purpose rather than just “saved seed” out of their last grain harvest.  It involves a “split application” of fertilizer, better seed treatments and possibly a fungicide spray. This represents a greater financial risk for the farmer, but also a greater reward when things go well.  These are the kind of adjustments that farmers can make which provide encouragement that the looming global food crisis can be at least partially ameliorated.

So, by any measure 1996 was a watershed year for US agriculture.  Agriculture is a remarkably dynamic and adaptive industry based on the independent decisions of thousands of individual family business owners who grow our food.  The notion that this vast network is “controlled” by any business or government is absurd.

Graphs based on USDA, National Agricultural Statistics Service data.  You are invited to comment here or to write me at savage.sd@gmail.com.  I would be happy to email a copy of these and other slides or you can download them from SCRIBD.  My Website is Applied Mythology.

Prefer organic food for your little ones? Check out our current selection of organic baby food from Earth’s Best, Baby’s Only, and Happy Bellies.