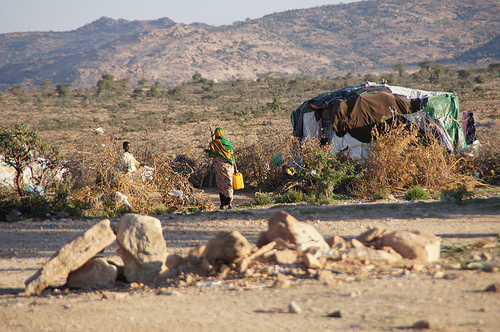 By Janet Larsen and Sara Rasmussen

The global average temperature in 2011 was 14.52 degrees Celsius (58.14 degrees Fahrenheit). According to NASA scientists, this was the ninth warmest year in 132 years of recordkeeping, despite the cooling influence of the La Niña atmospheric and oceanic circulation pattern and relatively low solar irradiance. Since the 1970s, each subsequent decade has gotten hotter — and 9 of the 10 hottest years on record have occurred in the twenty-first century. Each year’s average temperature is determined by a number of factors, including solar activity and the status of the El Niño/La Niña phenomenon. But heat-trapping gases that have accumulated in the atmosphere, largely from the burning of fossil fuels, have become a dominant force, pushing the Earth’s climate out of its normal range. The planet is now close to 0.8 degrees Celsius warmer than it was a century ago. Hidden within annual averages and expected variability are startling instances of new temperature and rainfall records in many parts of the world — weather extremes that would once be considered anomalies but that now risk becoming the new norm as the Earth heats up.

Worldwide, 2011 was the second wettest year on record over land. (The record was set in 2010, which also tied 2005 as the warmest overall.) Heavier deluges are expected on a warmer planet; each temperature rise of 1 degree Celsius increases the amount of moisture the atmosphere can hold by about 7 percent. Higher temperatures also can fuel stronger storms.

Brazil started the year with the deadliest natural disaster in its history: in January, a month’s worth of rain fell in a single day in Rio de Janeiro state, leading to floods and landslides that killed at least 900 people. That same month, flooding in eastern Australia covered an area nearly the size of France and Germany combined. Overall, it was the third wettest year in Australia since recordkeeping began in 1900.

The most expensive weather disaster of 2011 was the flooding in Thailand in the second half of the year, which ultimately submerged one third of the country’s provinces. At $45 billion worth of damage — equal to 14 percent of Thailand’s gross domestic product — it was also the costliest natural catastrophe the country ever experienced.

In October, more than 100 people died as two storms — one from the Pacific and the other from the Caribbean — pounded Central America with rain. In western El Salvador, nearly 1.5 meters of rain (almost 5 feet) fell over 10 days. And in December, Tropical Storm Washi hit the Philippines, creating flash floods that killed more than 1,200 people.

The 2011 Atlantic hurricane season had 19 named storms. Hurricane Irene brought extreme flooding to the northeastern United States in August, with total damages topping $7.3 billion. The year was the wettest on the books for seven states in the country, while it was among the driest for several others. Although the extremes appear to balance out, making for a near-average year, in fact a record 58 percent of the contiguous United States was either extremely wet or extremely dry in 2011.

Indeed, as is expected on a hotter planet, while some parts of the globe were overwhelmed by rain in 2011, others were distinguished by dryness. A severe drought in the Horn of Africa that began in 2010 devolved into a crisis situation in 2011, characterized by crop failure, exorbitant food prices, and widespread malnutrition. Exacerbated by chronic political instability and a belated humanitarian response, the death toll may have exceeded 50,000 people.

Back in North America, a drought that began in late 2010 and worsened over 2011 led hundreds of farmers from northern Mexico to march to that nation’s capital in January 2012 to draw the government’s attention to their suffering. Nearly 900,000 hectares of farmland (some 2.2 million acres) and 1.7 million head of livestock were lost due to the dryness — the worst in Mexico’s 70+ years of data collecting.

Scorching heat, drought, and wildfires across the U.S. Southern Plains and Southwest caused farm, ranch, and forestry damages that exceeded $10 billion in 2011. Wichita Falls, Texas, experienced 100 days over 100 degrees Fahrenheit — far more than the previous record of 79 days set in 1980. Oklahoma and Texas had the hottest summers of any states in history, breaking by a wide margin the record set in 1934 during the Dust Bowl. James Hansen, director of NASA’s Goddard Institute for Space Studies, writes that the likelihood of such extreme heat waves “was negligible prior to the recent rapid global warming.” Texas also had its lowest rainfall on record. Invigorated by the heat and drought, wildfires burned across an estimated 1.5 million hectares (3.7 million acres) in the state.

For the continental United States, summer 2011 was the second warmest in history. Nearly three times more weather stations hit record highs than lows in 2011, in line with a trend of increasing heat extremes. Whereas in the middle of the 20th century there were close to the same number of record highs and lows — as would be expected absent a strong warming trend — in the 1990s highs began outpacing lows. In the first decade of this century, there were twice as many record highs as record lows.

Even the Arctic had a notably warm year, with the 2011 temperature a record 2.2 degrees Celsius (4 degrees Fahrenheit) above the mean for 1951–80. Barrow, Alaska, the northernmost U.S. city, spent a record-breaking 86 consecutive days at or above freezing, far more than the previous record of 68 days set in 2009.

In fact, over the last 50 years temperatures in the Arctic have risen more than twice as fast as the global average, melting ice and thawing permafrost. Arctic sea ice has been shrinking more rapidly, falling to its lowest volume and second lowest area on record during the 2011 summer melt season. With the summertime ice loss outpacing wintertime recovery, Arctic sea ice has thinned, making it increasingly vulnerable to further melting. Scientists expect a completely ice-free summertime Arctic by 2030 or even earlier.

As the reflective ice disappears, it exposes the dark ocean, which more readily absorbs solar energy, further warming the region. This sets forth a climate cascade, accelerating ice loss both in the ocean as well as on nearby Greenland, which contains enough ice to raise global sea level by 7 meters (23 feet) if it completely melted. The warming also thaws Arctic permafrost, releasing carbon dioxide and methane, further accelerating global warming.

Even without fully incorporating such climate feedback, models show that continued reliance on fossil fuels could raise the global temperature by up to 7 degrees Celsius (over 12 degrees Fahrenheit) by the end of this century. Such an elevated temperature would amplify temperature and precipitation extremes enough to make the weather events of recent years look tame in comparison. Only a rapid, dramatic reduction of greenhouse gas emissions can hold future temperatures in a range bearing any resemblance to what civilization has known.