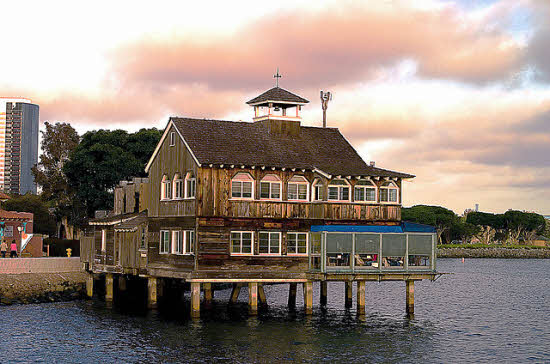 These pedestrian malls are all great places to spend time exploring great car-free retail, dining, and entertainment.  The trend of a walkable pedestrian mall cut off from car traffic gained in popularity in the 60’s and 70’s as a way to revitalize downtowns, and while the successful ones still see millions of happy visitors each year, many were closed down.  The ones in this list are examples of some of the more successful developments for ditching the car for an afternoon of walking, shopping, entertainment, and dining.

Seaport Village is a waterfront destination with 54 unique stores and 17 different places to eat covering 14 acres in the year-round sunny weather of San Diego, CA.  Yearly attractions feature a Busker’s Festival, live music, and even a Surfing Santa.

One of the most successful pedestrian malls in the country with over 120 shops and 30 restaurants, the Downtown Mall is even called an Urban Park.  In addition to the shops and dining, Charlottesville’s Downtown Mall has an ice skating rink and a newly built outdoor entertainment pavilion

Built in 1981, Burlington’s Church Street Marketplace sees 3 million people walk around through its wide, brick-lined street.  They are home to enough shopping to keep you busy for days.  Most shops are unique local stores, but there are a few national retailers like Patagonia and Banana Republic.  They have also implemented a few environmentally-friendly programs on like composting food waste from Church St eateries.

Over 200 shops, 80 places to eat, museums, and the Madison Civic Center line the blocks on State Street connected to the University of Wisconsin – Madison.  State street features a world-wide selection of cuisine and, as you’d guess from WI, a great selection of taverns.  Every year on Halloween tens of thousands of people attend “Freakfest” dressed in costume to watch nationally touring musicians like OK Go and OAR.

Warren Howe is a freelance writer in San Diego, who loves car free downtown spaces. As a resident of San Diego, he gets down to Seaport Village whenever he can, and enjoys walkable spaces whenever he travels.