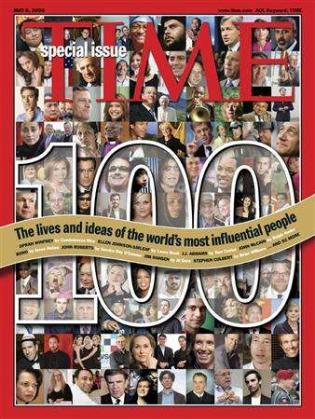 Wait, wasn’t there supposed to be a rabbi in there somewhere?

Tonight was the Time 100 Gala, where Time Magazine celebrates 100 of the most influential people in the world today. This year, three religious leaders are included.

What Richard Cizik, Patriarch Bartholomew I, and the Dalai Lama have in common is that they’ve all made headlines from leading green movements within their respective faith traditions.

Cizik, an ordained Evangelical Presbyterian miniser and head of the Office of Governmental Affairs for the National Association of Evangelicals fights global warming by quoting the Bible and calling on congregations to practice “creation care.” Cizik challenges conservative evangelicals to recognize climate change as a serious threat to the health of the planet.

Cizik also makes friends with scientists such as Nobel Peace Prize winner Eric Chivian, ignoring a once perceived barrier between the religious and scientific communities.

The leader of Eastern Orthodox Christians appeals faithfully to his ancient religious tradition to claim that ecological questions are essentially spiritual ones. Bartholomew appeals to the theology of his revered predecessors, claiming that creation bears the glory and revelation of God, to call for greater environmental responsibility among Orthodox Christians.

Rowan Williams, the head of the Anglican Church, writes, “Probably more than any other religious leader from any faith, Patriarch Bartholomew has kept open this spiritual dimension of environmentalism.”

The Dalai Lama’s infectious laugh in spite of chaos and oppression has puzzled some and inspired many. Under this surface, however, is a desire for a more peaceful human existence. This includes a more holistic approach to how we spend our time on the planet.

“We are the superior species on Earth but also the biggest troublemakers,” he once told Deepak Chopra.

Chopra recalls a piece of advice the Dalai Lama once gave him: “Without relying on religion, we look to common sense, common experience and the findings of science for understanding,”

Imagine this level of calm compassion practiced by all.

More on the Cizik, Bartholomew, and the Dalai Lama: