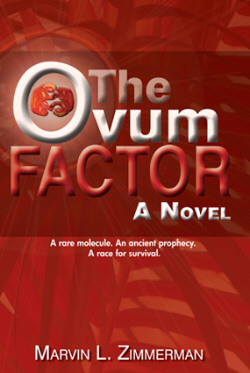 Nearly three years ago, I took note of Bill McKibben’s Grist essay calling for more artistic expression about climate change, and lamented the most popular offerings on the subject at the time: the movie The Day After Tomorrow, and Michael Crichton’s global warming conspiracy novel State of Fear. This past weekend, I had the opportunity to read one of the latest efforts to address climate change within the framework of popular fiction, Marvin L. Zimmerman’s The Ovum Factor. This “eco-thriller” is the author’s first novel, and he demonstrates a real talent for spinning a page-turning yarn: I read the book in two sittings. Despite the story’s fast pace, though, Zimmerman succeeds in creating a work that a reader may finish quickly, but won’t simply put down afterwards. The thoughts that reader may have upon finishing The Ovum Factor, though, often won’t necessarily coincide with the author’s intentions..

Zimmerman’s protagonist, investment banker David Rose, isn’t particularly unique: like a number of John Grisham main characters, he’s successful, but unfulfilled. He’s looking for meaning in work driven almost solely by profit margins. Ironically, it’s the head of the firm for which David works that provides him an opportunity to find such meaning: billionaire Isidore Steinmartz sends the junior associate to Southern California to assess a project underway by Cal Tech professor and Nobel prize-winner Charles MacMillan. The project is titled PANDA, an acronym for Project for Accelerated Neural Development in Anthropoids. In short, MacMillan is studying how to increase the brain’s development during gestation, and produce super-intelligent children. Steinmartz, a member of an elite secret society charged with watching for, and heading off, the extinction of the human race, believes a generation of such beings will be needed to tackle the massive ecological challenges facing the planet and humanity.

Yep, it already sounds a little creepy, and Zimmerman acknowledges as much at several points in the book when characters note that such experimentation could be incredibly dangerous if it fell into the wrong hands. While that threat exists throughout the novel (the Catholic Church, of course, proves one of the technology’s most persistent and ruthless enemies), Zimmerman inoculates his main character from harm by relying on a concept as old as storytelling itself: fate. Throughout the novel, the characters discover ancient prophecies leading to the conclusion that David and his newfound love interest Emily Chang (a scientist on the PANDA project) will play leading roles in ushering the new generation of kids that will save us from ourselves.

Sound familiar? It should: The Ovum Factor could be described as The Da Vinci Code meets The Celestine Prophecy. New Age spirituality abounds throughout the book, and many readers will likely recognize that Zimmerman’s generation of geniuses bears a striking resemblance to “indigo children.” If these children aren’t born, humanity is doomed.

I’ve got no problem with such concepts; I even find them fascinating. In Zimmerman’s hands, though, they ultimately point to hopelessness without spiritual intervention (the exact kind of criticisms some readers had about Chad’s post on Easter and environment). You don’t have to be a regular sustainablog reader to know that I’d take issue with such an approach; rather, I find it just as dangerous as arguments claiming that earth-saving technology is just around the corner, and we should just wait for it.

I did enjoy the popular fiction aspects of The Ovum Factor — I love a good thriller! I noticed occasional flaws in the narrative — an unexplainable perspective shift here and there, for instance — but ultimately enjoyed Zimmerman’s ability to tell his story. He does a very nice job of weaving multiple narrative threads together into a single work. And, for some, The Ovum Factor will do what McKibben claims a work of art on environmental challenges should do: “Art, like religion, is one of the ways we digest what is happening to us, make the sense out of it that proceeds to action.” Ultimately, though, the action required of this novel’s characters is to accept their roles in a larger metaphysical drama… and I’m not sure that’s the mindset we need when facing challenges like climate change.

I’m very interested to hear your own responses to this book: please respond here in the comments, or join the discussion I’ve started in the Green Options Media forums.