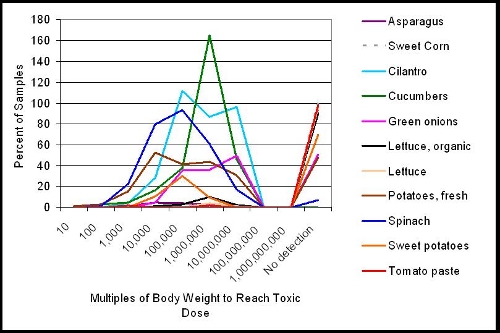 When the Environmental Working Group (EWG) makes its annual “Dirty Dozen List” of fruits and vegetables with pesticide residues, it does so without paying any attention to which chemicals were found or what level was detected. This is why it is so misleading.  To do the analysis properly does take a lot more “work” – it took me much of the last two days to do it.

First I had to download the raw data which comes as a 5.5 MB ZIP File that expands to a 83 MB text file.  My son wrote a little Ruby On Rails script that sifts through the millions of rows of data to find the 30,000 actual “detections” of pesticide residues that the USDA reported for 2009.  That list has the identity of the pesticide and its concentration in parts per million, billion or sometimes trillion.  Next, I searched for an MSDS for each of the 300 or so different chemicals to get the specific acute toxicity (this is usually in section eleven of each document).  The acute toxicity is expressed as an LD50 – the milligrams of chemical it would take per kilogram of body weight to kill 1/2 of the rats in a feeding study (Oral LD50).  These are publicly available documents which are usually easy to find except for old, discontinued pesticides and some of the metabolites.  Dividing the LD50 by the detected amount gives you the multiple of its own body weight that the rat would have to eat to reach a toxic dose.

An Example You Can Blame on McDonald’s

As an example, an old, extremely toxic pesticide, aldicarb (Temik) has an LD50 of 1 mg/kg.  This is exactly what you imagine when you hear the word, “pesticide.”  In one sample of fresh potatoes, the USDA scientists detected 0.01 mg/kg of aldicarb sulfoxide – a metabolite which is just as toxic as the aldicarb.  For the rats to die from eating such potatoes would require that they rapidly consume 90 times their own weight of those particular potatoes.   The most toxic potato sample had 1.5mg/kg of the aldicarb sulfoxide which means that the rates could die by eating just one times their own body weight.  A rat might be able to do that.

The EWG essentially treats every one of the 30,000 detections as equal in risk to these worst-case potato values.  Because most pesticides are far, far less toxic than aldicarb, the average residue found by the USDA on potatoes has a safety margin of 595,163.   The only reason that aldicarb is still used on potatoes (and it will be phased out soon), is that for purely brand protection reasons, MacDonald’s asked it’s fry suppliers not to give them any more GMO potatoes (they had been using them for several years, and they still cook them in GMO soybean oil and serve up GMO sodas with corn sweetener).  Still, McDonalds killed the Bt-potato.  That is why potato growers plant their potatoes into a furrow with granular aldicarb so that the roots pick up the insecticide for ~60 days, protecting them from the Colorado Potato Beetle.  Still, potatoes are in about the middle of the pack in terms of average safety margin.  Oranges have a safety factor of nearly 1.5 million. 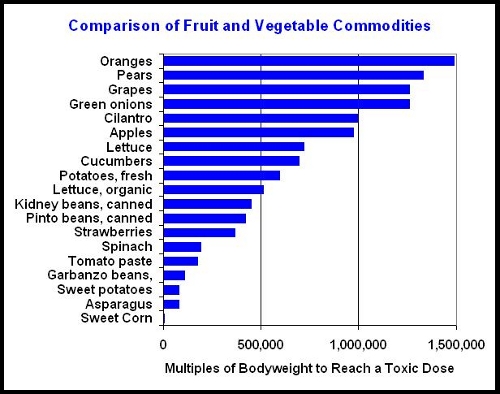 Sweet corn, which makes the “Clean Fifteen” list for EWG is actually the crop with the lowest average safety margin (8,909).  This demonstrates the meaninglessness of the Dirty Dozen list.

Of course, averages can be misleading.  It is more instructive to look at the full distribution of results.  The graph below summarizes all the sample results for fruit crops.  For this graph, values on the right side of the graph represent extremely low risk while those to the left represent relatively higher risk.  As you can see, even though these crops had many pesticide residues, they almost all were present at vanishingly levels meaning extremely minor risk.  People just don’t eat one hundred, one thousand or several million times their body weight of one food in a sitting! 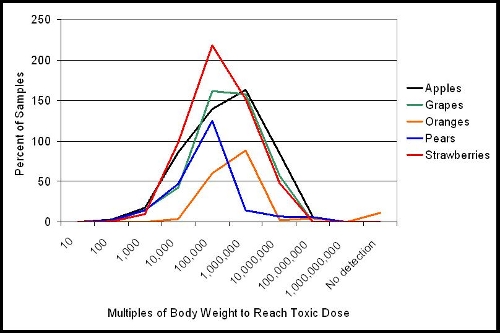 The same is true for vegetables.  The few residues detected on lettuce have safety margins in the million-fold range and the non-Organic lettuce was actually a little better than the Organic lettuce.  By this methodology potatoes and spinach come out the worst with some safety margins in the thousand range.  Still, the message from the real data is completely different than what one gets from the EWG’s “analysis.”

When the EWG list is reported by the unsophisticated media, they say things about it which are completely false.  For instance thirdage.com said, “The “dirty dozen” list of the twelve fruits and vegetables with the highest amount of pesticide residue was released Monday by the Environmental Working Group (EWG).”  That would be impossible because the EWG did not access the raw data which would be necessary to identify how “high” the residues actually were.  They say that cherries “dropped off the list” without mentioning that cherries were not even one of the crops tested in 2009.

So, what does the USDA data actually tell us?  That we should feel confident that the fruits and vegetables available in our markets are perfectly safe, and we should be consuming them in ever greater quantities to take advantage of all the cancer- and other disease-fighting chemicals they naturally contain.  It also tells us that the EWG should be ashamed of their list, print a full retraction, and refund their ill-gotten financial gains.

If anyone would like a copy of the processed data or graphs I would be happy to email it from savage.sd@gmail.com.  Also if anyone would like to improve on my collection of LD50 values that would be much appreciated.  My website is Applied Mythology.