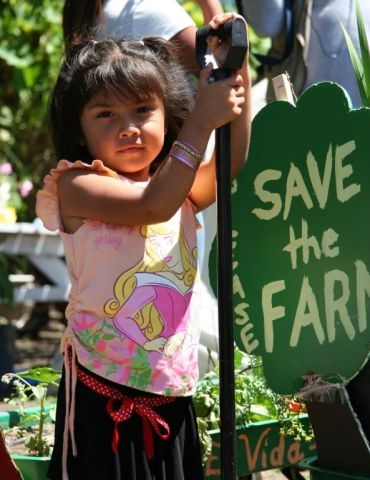 Today, the Los Angeles Sheriff’s Department lowered the boom, and enforced the eviction order against the South Central Farmers. Despite international support and a $16 million offer (the asking price) by the Annenberg Foundation and the Trust for Public Lands to owner Ralph Horowitz, this success story in urban sustainable farming has ended. It look like actress Daryl Hannah and environmental activist John Quigley were arrested while protesting the eviction, though the details are still a bit sketchy at this point.

I’m sure there will be lots of debate over who’s to blame for the loss of this community farm that fed 350 families for nearly 15 years, but it looks like Horowitz went out of his way to play Darth Vader. Not only did he refuse to sell when offered the price he set, but, according to Gristmill, he also can’t understand why the farmers aren’t thanking him. As Dave Berry would say, I am not making this up…

[Landowner Ralph] Horowitz noted that the farmers were squatting on land zoned for warehouses and factories. The landowner said in a telephone interview that he was paying $25,000 to $30,000 a month in mortgage and other land costs.

“We’ve made, in the last three years, enough of a donation to those farmers,” he said. “I just want my land back.”

Horowitz accused the farmers of ingratitude, saying they had sued him and their supporters had picketed his home and office.

“I feel that the gardeners have been on the land for 14 years, almost 15 years for free. After 15 years, you say thank you,” he said.

Poor Ralph. Would somebody please send him a card…? After all, I’m sure he needs that land to feed his family, too… or to build a warehouse… what’s the diff, right?