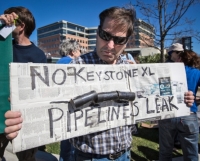 Most discussion of TransCanada’s proposed Keystone XL pipeline involve the northern section that would cross the US-Canada border… and thus requires State Department and Presidential approval. While activists, politicians, and oil industry representatives have continued to argue over this portion of the pipeline, its southern section – which exists completely within the US – has been built, and is now open for business.

Yesterday, the oil from from Alberta’s tar sands operations began to flow through Keystone XL South. To mark the occasion, and show that the controversy surrounding this project has not yet  died, DesmogBlog published a collection of responses from activists, whistle blowers, and landowners affected by the pipeline on Tuesday. We’ve republished this post below.

We’re still waiting on a decision about the rest of the pipeline: the Obama administration has played this one very close to the vest, as the political implications are enormous. We hope the President remembers the profound environmental consequences this project will likely produce: not just potential spills (though we’ve seen plenty of evidence of that lately), but also the increase of CO2 emissions from this oil, and the grave (and documented) health risks to people in Alberta. We can do better than this.

Today, January 22, the southern portion of TransCanada’s Keystone XL pipeline is set to become operational, although environmentalists and Texas homeowners are continuing to fight against it. TransCanada is surely celebrating now that it has a pipeline…