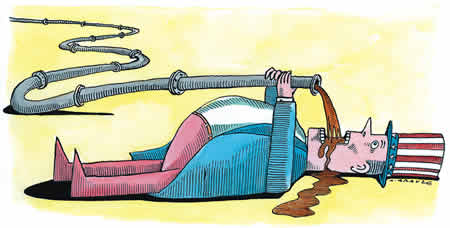 While Dubya’s proclamation that the US is addicted to oil is old news at this point (ancient news in blogosphere time), this article from National Geographic discusses practical possibilities for doing something about that addiction. Its already clear to all of us that much of the political discussion about this issue isn’t of much use, and this article provides a nice overview of the possibilities and pitfalls of current and emerging technologies. A few highlights:

President Bush’s proposed reduction in Mideast oil imports amounts to about 15 percent of total current U.S. oil usage. Most energy experts view that as a step in the right direction.

One possible way to do it is to increase the average car’s fuel economy by a few miles per gallon.

If such regulations were passed today, they would begin to have a significant impact in time to meet the president’s 2025 deadline. That’s because car designs are planned years in advance and old cars remain on the roads until they wear out.

I simply don’t understand the resistance to increasing CAFE standards, especially from the auto industry. Wouldn’t this make their products more competitive? At the same time (as I’ve discussed), there are ways of addressing fuel efficiency that are less prescriptive, and could produce the same outcomes.

In the State of the Union address Bush also said, “We will increase our research in  pollution-free cars that run on hydrogen.” (See “Hydrogen-Fueled Race Car Showcases Future Technologies.”)

“You can’t make a hole in the ground and pump hydrogen,” Prakash said. “You have to make it.”

Furthermore, he said, “storage and distribution are a nightmare.”

The problem is that hydrogen is an extremely permeable gas. If placed in current gas tanks and pipelines, it would seep through the walls and be lost.

“All of these things look nice to the layman,” Prakash said. “But there are lots of pitfalls.”

Of course, the article also discusses biofuels, noting that cellulosic ethanol could be very promising. There’s also a plug for plug-in hybrids. Its interesting to note that all of this discussion is still premised on personal transportation. Is that just so hardwired into the American psyche that proposing a big shift to mass transit solutions is simply out of the question?