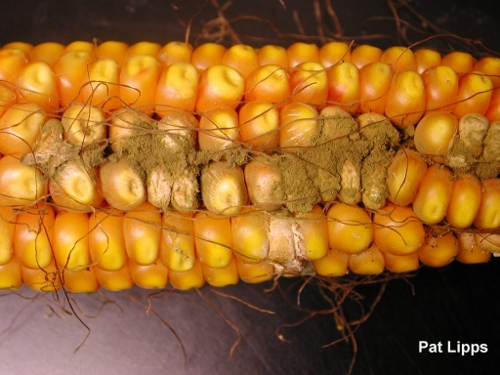 One of the most toxic and carcinogenic threats in the human food supply is a natural chemical called “aflatoxin” that is produced by a fungus called Aspergillus.  This opportunistic plant pathogen has the capacity to grow on a wide range of foods and feeds (corn, peanuts, cotton seed, tree nuts, dried spices and chiles…).  The chance that it will contaminate a crop is enhanced by drought and/or insect damage – unfortunately both conditions expected to be more common with the onset of climate change.   We didn’t even know about this nasty chemical until 1960 when it was identified as the cause of death for more than 100,000 turkey poults in the UK that ate contaminated feed.  Since that time we have come a long way in learning how to protect crops from contamination where possible, or to detect the toxin and thus keep it out of the food supply.  The problem is that the degree to which people are protected from this threat varies widely around the world.  The need to solve that disparity will only become more urgent.

I maintain a Google Alert for “aflatoxin” so that I can keep track of what is happening with this risk around the world.  I’ll describe some recent news coming from regions with a very different status in terms of managing this threat:  the US, China and Kenya.

In rich countries like the US, the food and feed industry generally does an excellent job of preventing aflatoxin contamination.  Most of the news items about aflatoxin from these countries involve things like ever more sensitive testing methods or advances in Aspergillus control.  However, late last year there was a rash of dog food recalls because of Aflatoxin.  Details have been hard to find, but the most likely explanation is that severe drought conditions in areas like Texas and Oklahoma increased the incidence of aflatoxin contamination this season.  One does not normally think about dogs eating corn, but corn-derived ingredients (corn gluten, DDG from ethanol production…) are plant-based alternatives to meat as a way to give dogs protein.  That these incidents were caught before any reports of dog injury is good news as opposed to an event in 2006 where 76 dogs died. The fact that the issue wasn’t caught before the products were shipped suggests that someone wasn’t being as watchful as they should have been in a drought year.  We have the awareness and the testing methods to prevent problems.  We just have to use them rigorously.

China:  A New Watchdog Agency Is Finding Many Problems

In a rapidly advancing society like that of China, aflatoxin management has become a new area of focus.  After the major scandal about melamine contaminated milk in 2008, the Chinese government stepped up safety monitoring for the food supply.  Not surprisingly, several issues are being found.  Milk contaminated with aflatoxin was recently discovered.  Aflatoxin was subsequently found in  peanuts and cooking oil in Guangdong Province.  Unfortunately, with a highly fragmented and rapidly changing food system, it is likely that it will take some time to fully protect the Chinese population from this toxin.

Africa:  Sometimes Even The Food Aid Is Contaminated

My Google Alert sent me a link to a particularly sad, but not uncommon article about an event in Africa.  This is from the text of An editorial in the Daily Nation from Kenya posted last Sunday:

At the weekend, Kenyans were treated to an unedifying spectacle of tonnes of relief food being destroyed due to aflatoxin contamination.  Hard evidence has been presented indicating the presence of dangerous levels of toxins in cereals sold in open markets as well as in urban food distribution chains.  After the contamination of maize in 2010, the Ministry of Public Health and Sanitation promised to mop up and destroy the stock.  At the same time, the Ministry of Agriculture promised to help farmers with better food drying technologies that would reduce contamination at the farm level. But the increasing cases during distribution indicate these agencies have not lived up to their promise or are not up to the task. It is unfortunate that a country which suffers perennial food shortages cannot protect the little that has been produced.

The food aid mention was Unimix that was to be distributed by the Kenyan Red Cross but which found to be contaminated with unacceptable levels of Aflatoxin.  In many poorer nations, Corn, peanuts, peppers, spices and other foods are commonly contaminated because of a combination of drought, insects, poor storage conditions and the like.  A more encouraging item that came up on my Google alert was the fact that the Bill and Melinda Gates Foundation is funding work to make extremely cheap and easy to use tests for aflatoxin.  I also saw an article about a mobile maize dryer for use in Africa to reduce the risk.  All these things could help, but there is a very long way to go.

The Daily Nation editorial concludes by saying “So far, the issue of food contamination has been handled casually and we feel it is time this was brought to the fore as a major food security concern because we cannot afford this kind of waste.”

Please feel free to comment here or to email me at sdsavage@gmail.com.  My website is Applied Mythology.