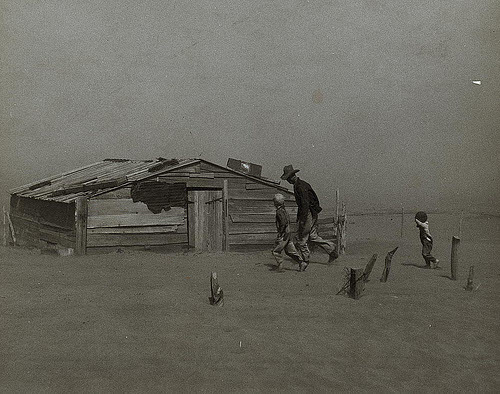 On October 18, 2012, the Associated Press reported that “a massive dust storm swirling reddish-brown clouds over northern Oklahoma triggered a multi-vehicle accident along a major interstate…forcing police to shut down the heavily traveled roadway amid near blackout conditions.” Farmers in the region had recently plowed fields to plant winter wheat. The bare soil — desiccated by the relentless drought that smothered nearly two-thirds of the continental United States during the summer and still persists over the Great Plains — was easily lifted by the passing strong winds, darkening skies from southern Nebraska, through Kansas, and into Oklahoma.

Observers could not help but harken back to the 1930s Dust Bowl that ultimately covered 100 million acres in western Kansas, the Oklahoma and Texas Panhandles, northeastern New Mexico, and southeastern Colorado. Yet when asked if that was the direction the region was headed, Oklahoma’s Secretary of Agriculture Jim Reese was unequivocal: “That will never happen again.”

In the early decades of the twentieth century, earnest settlers of the semi-arid Plains, along with opportunistic “suitcase farmers” out to make a quick dollar, plowed under millions of acres of native prairie grass. Assured that “rain follows the plow,” and lured by government incentives, railroad promises, and hopes of carving out a place for their families, these farmers embraced the newly available tractors, powerful plows, and mechanized harvesters to turn over the sod that had long sustained Native American tribes and millions of bison.

The plowing began during years of rain, and early harvests were good. High wheat prices, buoyed by demand and government guarantees during the First World War, encouraged ever more land to be turned over. But then the Great Depression hit. The price of wheat collapsed and fields were abandoned. When the drought arrived in the early 1930s, the soils blew, their fertility stolen by the relentless wind. Stripped of its living carpet, freed from the intricate matrix of perennial prairie grass roots, the earth took flight.

Clouds as tall as mountains and black as night rolled over the land. Regular dust storms pummeled the homesteaders; the big ones drew notice when they clouded the sun in New York City and Washington, DC, even sullying ships hundreds of miles out in the Atlantic. Dunes formed and spread, burying railroad tracks, fences, and cars. “Dust pneumonia” claimed lives, often those of children. People fled the land in droves.

In The Worst Hard Time, Timothy Egan describes the topsoil loss, how a “rich cover that had taken several thousand years to develop was disappearing day by day.” The sodbusters had quickly illuminated the dangerous hubris in the 1909 Bureau of Soils proclamation: “The soil is the one indestructible, immutable asset that the nation possesses. It is the one resource that cannot be exhausted; that cannot be used up.” The rechristened Great Plains looked like it would revert back to its original name: the Great American Desert.

When a series of dust storms reached far-flung Washington, DC, in the spring of 1935, a reluctant Congress was finally convinced to allocate resources to help stabilize the soil. With government subsidies and direction from the newly created Soil Conservation Service, practices were introduced to help hold down the earth. Grasses were replanted; shelter belts of trees were planted to slow the persistent winds; contour farming or terracing was used to farm in line with the natural shape of the land; strip cropping was used to leave some protective cover on the soil; and crop rotations and fallow periods allowed the land to rest.

Is a Second Dust Bowl Coming?

While some of the Dust Bowl land never recovered, the settled communities becoming ghost towns, many of the once-affected areas have become major food producers. By 1933 wheat production in Kansas, Texas, Oklahoma, and Colorado was slashed by nearly three-quarters from its 1931 high of 411 million bushels, taking until 1947 to reach that level again. In 2012, the wheat output of these four states exceeds 700 million bushels, a third of the U.S. wheat harvest.

After World War II, well-drilling and pumping technologies allowed farmers to tap into the Ogallala aquifer, a vast reservoir of water beneath the Plains, stretching from southern South Dakota through the Texas Panhandle. Irrigation expanded, with center-pivot sprinklers creating the green circles overlain on brown squares that are familiar to anyone who has flown over the central United States.

In recent decades irrigation has allowed the traditional Corn Belt to move westward onto drier lands. Kansas, for instance, sometimes called “the Wheat State,” harvesting one-sixth of the U.S. crop, now produces as much corn as it does wheat. The wheat is primarily rainfed, but more than half the corn is irrigated.

As extraction of the underground water has increased, however, water tables have fallen. The depletion is particularly concerning in the Central and Southern Plains where there is virtually no replenishment of the aquifer from rainfall, foreshadowing an end to the use of this finite resource. In the former Dust Bowl states, irrigation had its boom, but in many areas it is beyond its peak. With wells going dry, some farmers have returned to the more-common rainfed wheat farming, which typically yields far less than with irrigation; others have gotten out of wheat all together.

In Kansas the average drop in the water table is 23 feet (7 meters), but some farmers have seen drops of 150 feet or more have been reported. The fall in water tables is even greater in the Texas Panhandle. Statewide, Texas’ irrigated area is down more than 20 percent from its high nearly 40 years ago. Only recently, after the water table fell fast during the back-to-back droughts, have limits been placed on withdrawals from individual wells there to slow the depletion. According to scientists at the University of Texas at Austin and the U.S. Geological Survey, if current rates of extraction continue, irrigation over a third of the southern High Plains will be untenable within 30 years.

Beyond the farm, climatologists are making it clear that the recent droughts are exactly the sort of event predicted to come more frequently as the planet heats up. So rainfed crops are in trouble, too. Models agree that with the global warming in store absent dramatic cuts in greenhouse gas emissions, much of the western United States—from Kansas to California—could enter into a long-term state of dryness, what physicist Joseph Romm has termed “dust-bowlification.”

With soil conservation measures in place, when drought revisited the Plains in the 1950s, the mid-1970s, the early 2000s, and again in 2011-2012—when Texas and Oklahoma baked in their hottest summers on record—a full-blown Dust Bowl did not develop. But will the ground hold forever? The United States is by far the world’s leading grain exporter; thus the fate of the nation’s “breadbasket” matters for food prices, and food security, around the globe.

While our understanding of and respect for the soil is greater now than it was at the turn of the last century, erosion still exceeds new soil formation on most acres. The combination of higher temperatures, prolonged drought, and irrigation limitations turns the prospects for continued large-scale crop production on the Plains grim. In case going through the worst recession since the Great Depression was not enough to remind Americans of hard times in the country’s past, climate change and the pressures of population and consumption growth pushing farmers to produce ever more food on limited land will make it harder to avoid a repeat of history.

Janet Larsen is the Director of Research for the Earth Policy Institute.