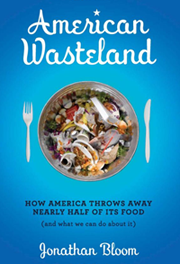 Did you know that fully 25-50% of all food produced in America goes to waste? Combine that with the amazing fact that 13% of the global population, or over one in every ten humans is malnourished, and you might be scratching your head, or more likely, seriously outraged. In his new book American Wasteland, writer Jonathan Bloom explores how and why so much of the food produced in America never gets eaten, along every step of the supply chain, from field to fridge.

From Booklist comes this description of American Wasteland:

In one of the twenty-first century’s most appalling ironies, developed nations throw away massive amounts of food while people in remote lands starve. Journalist Bloom documents some specifics about the nature of wasted food in the twenty-first century and calls into question both the economic efficiency and the morality of such profligacy. He finds food crops lying rotting in fields owing to intentional social policy, economic vagaries, and sheer ignorance. In restaurants, portion sizes have ballooned under the mantras “Bigger is better” and “Would you like to supersize that?” And many Americans allow food to decay on refrigerator shelves out of carelessness, lack of meal planning, and sheer ignorance. Bloom has found some hopeful signs that this trend may be waning. Many grocery stores and restaurants dispose of surplus edibles through food pantries and similar charitable outlets. Some socially conscious farmers are trying to revive the ancient practice of allowing the poor to glean.

As some one who feverishly attempts to never let food go to waste, this book definitely catches my interest. It is truly criminal how poorly addressed the food waste issue has been in the past (and even encouraged, in some cases), but it’s possible, as Bloom demonstrates, that the tides are changing.

Let’s hope so. In the meantime, check out American Wasteland (affiliate link) to learn more about how food is wasted along every step of the way, from farms, to processing plants, supermarkets, restaurants, and our very own refrigerators.