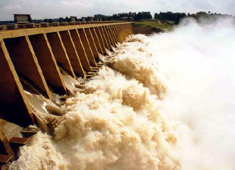 I found this article from SouthAfrica.info on a just-finished conference on Hydropower and Sustainable Development in Johannesburg interesting not only for what it says about energy development in Africa, but also for what it leaves out:

At the conclusion of the four-day African Ministerial Conference on Hydropower and Sustainable Development in Johannesburg on Thursday, African leaders committed to developing a continent-wide energy vision for 2025 to be monitored by ministers of finance, energy, water and the environment under the auspices of the African Union (AU).

Delegates agreed that exploiting the potential of hydropower as renewable energy could help meet the power needs of the continent.

The vision includes analysing case studies of hydropower projects in Africa, which will serve as mentoring examples.

The ministers also agreed that hydropower development should be underpinned by sound environmental and social impact assessments, mitigation and management of plans, in accordance with national regulatory frameworks and international standards of good practice.

I’d agree that for large-scale power generation in Africa, hydropower is likely a good bet. But I also got to thinking (and I’m sure this isn’t a new idea) that Africa and other underdeveloped areas might benefit more from a distributed generation strategy. Wouldn’t it be cheaper and more efficient to build local power sources that could then be linked into a larger grid? Wouldn’t a region with such political instability also be better served by local generation, because military factions couldn’t necessarily cut off power to large areas? It seems to me that an appropriate technology strategy might better serve Africa in the short and long runs — big and centralized (which damns are) seems problematic at a number of levels.

Just thinking out loud… feel free to do the same… Obviously, Africans themselves have to decide what works best for them.