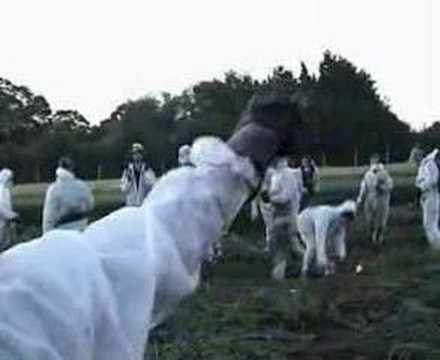 I need to be very careful in what I say about this topic because it would be easy to scare people beyond what is rational.  I could also also easily make enemies in the Wheat industry which is about the last thing I’d like to do.  I’m going to try to hit the right balance, but it is risky.

Most people don’t know that Mycotoxins are a very real issue in our food supply.  These are nasty, natural chemicals that are produced by certain fungi that infect crops. This is not something new.  In Medieval times there was a wide-spread neurological disorder called “Ergotism.” It was caused by mycotoxins in the rye crop produced by a disease called “ergot.” The poor people who lived off of rye, rather than wheat, were disproportionately effected.

Mycotoxins are still an issue today.  2009 has been a particularly bad year for a toxin called “vomitoxin” in wheat, barley and pasta wheat.  Its not a secret, but unless you read the farm press or trade news, you would never know.  Sometime do a Google News search for “vomitoxin.”  If there is rain when these grains are flowering, they can become infected with a fungus called Fusarium graminierum. The disease starts by reducing the farmer’s yields, but it can also produce a toxin in the remaining grain called deoxynivalenol (more commonly called DON toxin).  The trade term, “vomitoxin,” comes from the physical response that animals have if they are fed too much of this contaminated grain (which is obviously not pretty).

How is This Toxin Managed Today?

So what happens to grain that is contaminated?  Much of it is detected and segregated-out at the grain elevator stage.  The unfortunate farmer takes an additional economic hit because the grain is “docked” (he/she gets a much lower price for it).  The contaminated grain is then directed into animal feed channels at low levels or into other non-food uses (in some places, ethanol).  Some lower-level grain contamination makes it into the food supply, but through extensive testing, the levels are kept below guidelines set by the FDA or by agencies in countries that import our grain.  When wheat is milled to make flour, the toxin from any infected kernels is well diluted.  I’m confident that vomitoxin in our food supply is at far lower levels than before all these safeguards were in place.  About the only way you can get enough vomitoxin to get sick is if by chance you eat an infected whole “wheat berry” in something like an artisan bread.  Whole-berry breads are tasty and healthy in other ways, but they are one of the few foods that I, as an agricultural scientist, intentionally avoid.

How Worrisome is This?

Back to the “Worry” thing.  How dangerous is low-level bio-toxin contamination like this in the food supply.  That is probably an unanswerable question.  There is no one with the “deep pockets” who has had to pay for chronic toxicity studies.

First some perspective.  I’m including a picture of the supply of Thai peppers I grew in my garden this year.  These little guys are loaded with a delicious but fairly toxic chemical called capsaicin. But capsaicin is exactly why I grow them for use in cooking.  Your morning coffee contains lots of the moderately toxic chemical, caffeine, but the caffeine is probably why you drink it.  Both of these chemicals are substantially more toxic than most modern pesticides. The good thing is that our bodies are pretty well designed for a world of natural toxins.  The cells that line our intestines only live for three days as a defense against these insults.   I’m trying to strike a balance here.  Toxins are not just OK, but in the case of vomitoxin I think that the industry is doing a pretty decent job. There are toxins I worry about much more than vomitoxin in terms of long-term effects.   I’ll be talking about those in my next post.

Still, it isn’t a desirable situation that this disease and toxin continue to cause the problems they do.  It is on my “worry list” because between the grower’s losses and all the expense of segregation and testing, this disease is costing us millions of dollars – possibly billions this year.  It would also be a really good thing to have more wheat grown as part of a more diverse rotation with corn and soybeans, but the risk of this disease for farmers has helped to pretty much push wheat out of the corn belt.  It has proven very difficult to breed for resistance to this particular disease and it is difficult to control with fungicides.

The Solution that Didn’t Happen and Why

A few years ago it looked like there might be a solution on the way.  The Swiss-based ag technology company, Syngenta, announced that it was working on a GMO trait for wheat which greatly reduced the production of vomitoxin.  It might not be the total solution, but it would be a great start.  That program was derailed around 2003 when European and Japanese importers threatened to boycott all North American wheat if any GMO was planted.  The wheat industry reluctantly bowed to this pressure and asked the technology companies to suspend their efforts to commercialize GMO wheat even though there was no scientific or regulatory reason to do so. The wheat growers are re-thinking that decision today.

European wheat and barley has even more issues with this particular toxin than that in North America.  In many years we have very little vomitoxin while Europe’s wetter climate makes is nearly a constant problem.  So here is how it seems to work for people that are under the sway of “the precautionary principle.”

The presence of a real live toxin that we know about is more acceptable than the risks that they can imagine but which never seem to have materialized in the growing of other GMO crops over long periods of time and billions of acres.

It would be one thing if Europe and Japan applied this logic only to their own food supply, but they have effectively imposed their view on the whole world.  Because they can wield market leverage as major importers, farmers continue to suffer economic losses and we all pay more for slightly contaminated grain.  Does that seem fair? European activists even vandalized the experimental plots for this wheat and then proudly posted a video of it.

In a table buried on page 48 of a Greenpeace Canada document posted on the web a few years ago to oppose wheat biotech (including this vomitoxin reducing technology), there was an acknowledgment that this disease is a “huge economic burden for growers” and that the associated toxin “can cause health problems in humans.” Interestingly, this was in a table in a column labeled “Challenges for campaigning.” Well, their “campaigning” has succeeded in keeping this toxin in the food supply for now.

You are welcome to comment on this site or to send an email to feedback.sdsavage@gmail.com (I promise I won’t give the address to anyone or to spam you).