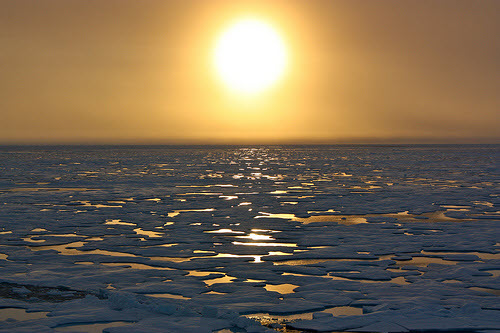 On October 7, 2013, the Nordic Orion bulk carrier ship completed its journey from Vancouver, Canada, to Pori, Finland, having traveled northward around Alaska and through the Northwest Passage. It was the first large commercial freighter ever to make the voyage through these typically ice-covered Arctic waters. Avoiding the longer journey, through the Panama Canal, reportedly saved $80,000 in fuel costs and five days in travel time. Taking a deeper route than the Panama Canal also allowed the ship to carry a heavier load of its cargo: coal. A second Arctic shipping option, the Northern Sea Route, is opening up even more to transportation. In 2007, only two ships made the entire trip north of Russia. In 2010, ten ships made the passage—and then the route got even busier. Seventy-one ships completed the voyage in 2013, including the first cargo ship from China. While the Chinese vessel was transporting shipping containers, the most common cargo loaded on ships taking the Northern Sea Route has been fossil fuels, particularly diesel fuel. This jump in traffic was made possible by a dramatic shrinkage of ice coverage. Arctic sea ice has plummeted to lows unseen in the past millennium. Historical records show that the summertime Arctic ice coverage varied little for more than 1,400 years. Then it began its freefall: over each decade since satellite records began in 1979, summer sea ice extent has shrunk by nearly 14 percent. (See data.)

In the summer of 2012, an area of ice larger than the United States and Mexico combined melted, dropping coverage of the Arctic Ocean to just half the average minimum coverage between 1979 and 2000. Arctic sea ice did not shrink quite as much in the 2013 summer melt season, but it still fell to the sixth smallest extent and the fourth smallest volume on record. Very little thick, multiyear ice remains. As the snow and ice that reflect much of the sun’s energy melt, more heat is absorbed, accelerating the melting and amplifying global warming. The Arctic is heating up twice as fast as the lower latitudes; since 1960, this region has warmed 2 degrees Celsius (nearly 4 degrees Fahrenheit). The Arctic has been mostly covered by ice for some 125,000 years, but scientists predict that the ice cap could disappear in the summers well before 2050. Researchers at the University of California–Los Angeles have modeled how ships could potentially traverse the Arctic in the most direct route—across the North Pole—by then.

Ironically, the melting is facilitating the transport and development of fossil fuels—the very substances that are driving temperatures higher. The disappearing ice is luring companies that are hoping to tap into the estimated undiscovered 90 billion barrels of oil and 1.7 quadrillion cubic feet of natural gas in Arctic territory—a risky endeavor, to say the least. Russia is building up its liquefied natural gas industry, developing a major plant in cooperation with French and Chinese energy companies on its northern coast, with plans to export the fuel to Asia along the Northern Sea Route.

While shipping and energy companies view the melting as a windfall, scientists view it as a warning. Arctic warming alters weather patterns far from the region and also accelerates sea level rise globally with the melting of the massive Greenland ice sheet. It may be too late to prevent an ice-free Arctic in the summertime, but there is still time to avoid the worst consequences of rising temperatures by leaving fossil fuels underground and rapidly transitioning to an energy economy centered on renewables.