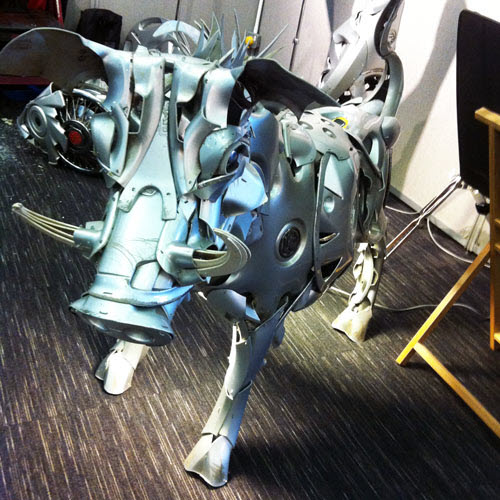 Ptolemy Elrington makes sculptures from scrap material and runaway hubcaps. He lives in the British seaside town of Brighton, and has been crafting his Hubcap Creatures for twelve years. In this time Ptolemy has built a name for himself, and now there is enough demand for his work that he’s able to do it full-time. He is known for his animals, particularly fish, but can make just about anything, and sells to all kinds of people.

“There’s an inherent message in my work relating to recycling and the nature of value, but my artistic inspiration is fired by the qualities within the raw materials… I come across many things which have been abandoned and find something more in them than their intrinsic worthlessness.” – Ptolemy Elrington, about his Hubcap Creatures.

Yes, hubcaps. Ptolemy either finds them by the side of the road or works from donations. He manipulates them using hand tools and wire – the only ‘concession’ to modern technology is his battery-powered drill. He bends his hubcaps by hand, preferring to work with plastic ones to metal because they’re more pliable. 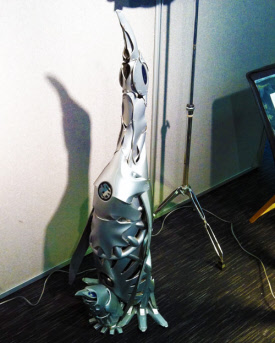 Ptolemy’s sculptures have wide appeal: they tickle the fancy of art lovers of all age, wealth or cultural lines. He’s sold to millionaires and to people with hardly any money to spare. In the past few years, as sustainability has become more relevant in business, he has been commissioned by organisations. Clients include brands such as Ernst & Young, for whom he made life-size sculptures of a samurai and geisha; his current commission is for Ecover, and will be a bee.

Ptolemy’s creations can take anything from a single day to three months, such as the giant, ten-metre long dragon he made from 200 hubcaps “that now has a flamethrower installed,” he says.

And where are they exhibited? The Ecover bee will be unveiled to tens of thousands of muddy people at the Glastonbury Festival this year, and it’s easy to imagine a few Hubcap Creatures swimming across the desert sands at Burning Man – which is somewhere he’d love to exhibit.

In the past, Ptolemy has been asked how he prefers to work: 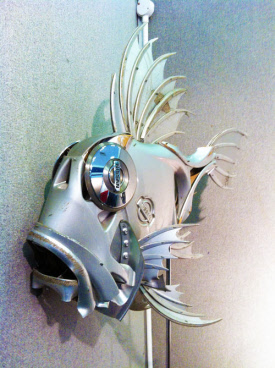 “I often prefer the shapes within the raw materials to ‘do their thing’, as this makes it more interesting for me. Sometimes a piece of hubcap fits in such a way that the shark becomes almost alive in my hands, climbing, twisting or just hanging motionless and predatory, and this gives me a buzz. It makes me feel like a vehicle for the creation process rather than a controller, and not knowing the exact outcome is exciting.”

Q: Do you accept donated scraps and hubcaps from strangers?

Q: What would be your ideal building material?

A: On the whole I prefer metal and plastics, but an old jet fighter would be very cool.

David Thomas writes for British sustainability blog The Eco Experts. He interviews and profiles businesses and individuals doing their own interesting thing in the area of sustainability, cleantech and circular economics.