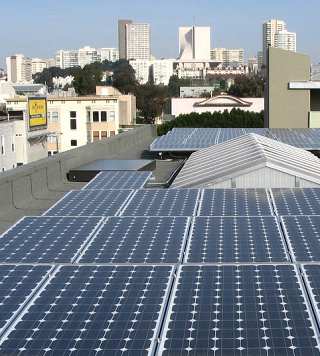 Though it looks like this news is a bit old in blogging time, I just found out about Australia’s Solar City initiative, and its plan to try the concept out in Adelaide. Using a combination of technologies, and both public and private funding, planners hope that residents in the project area end up saving around $200 (Australian) on their electric bills:

The proposal aims to install PV panels on more than 1,700 homes in the northern part of Adelaide, [and to] roll out 7,000 “smart meters” …

Consumers will be able to purchase the PV panels, made by BP Solar in Sydney and SLIVER cell technology from Origin Energy’s Adelaide plant, using discounted loans. The project also plans to help low-income and rental households in the community share in the benefits of the project through other cost-saving initiatives.

The Adelaide Solar City consortium — Origin Energy, BP Solar, Big Switch Projects, City of Salisbury, Mawson Lakes Development and the ANZ Banking Group — will receive up to AUD $15 million [US$11.2 million] through the Australian Government’s $75 million [US$56.5 million] Solar Cities initiative. The consortium expects to raise an additional AUD $38 million [US$28.6 million] from industry and other partners.

Let’s give a hand to Australia — despite following the US lead on Kyoto, and on the alternative Pacific climate pact, the Aussies do seem to be addressing climate change at the national level. I’ll be really interested to see the results from the Adelaide experiment, and if they lead to other such projects Down Under. On the surface, this seems like an ideal public-private partnership — any Australian readers want to correct or enlighten me?