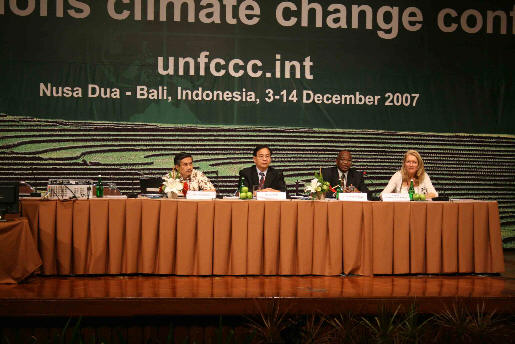 If you’re followed the news at all over the last two days, it’s hard to escape that the UN’s Climate Conference in Bali started yesterday… and that there’s already good news out of it. Yet, I’ve already come across a couple of op-ed pieces from around the world (and not from climate change skeptics) claiming that whatever agreements come out of the Bali conference won’t make a huge difference. German member of parliament and president of the EUROSOLAR organization Hermann Scheer, for instance, told Deustche Welle:

For many governments, these meetings take the place of doing something, according to the unwritten motto: “Speak globally, delay nationally.” Everything is put off until the conference, even though they know that no real break-through decisions will happen there. The question has to be asked: Is this the right level to be solving these problems at? …

These conferences do have significance, which is why they should be held — that is, raising awareness of the problem and creating public pressure on the countries to act. Their value is in keeping the topic up high on the political agenda. But you can’t expect the necessary, practical solutions here. Action has to happen later, in the individual countries themselves.

Deloitte’s head of Corporate Responsibility and Sustainability Practice Valerie Chort doesn’t use quite such strong language in her Globe & Mail op-ed, but she does note that “Forward thinking organizations realize they can’t sit back and wait for world governments to provide targets and direction if they are to remain competitive in a global economy.” The bottom-line case for companies to address and reduce their carbon footprints already exists; an international (or even national) standard will help companies with targeting and planning, but won’t necessarily create more urgency on the issue.

Don’t get me wrong: I don’t think that the Bali conference is a waste of time by any means. World leaders need to come together to discuss and make commitments about reducing global greenhouse gas emissions. But I think Scheer’s question about the level at which these problems can be solved is legitimate. Furthermore, I think Chort’s argument complements this question: governments aren’t the only bodies with a stake in addressing climate change, and won’t be the only ones that need to take leadership. The US provides a compelling example of how the private sector recognizes both the threats and opportunities presented by global warming, while the government is still mired in outdated thinking that puts the public interest and economic stability at odds. This example becomes even more compelling when we consider the “business-friendly” nature of the current administration: Bush and co. are making arguments that even their corporate supporters don’t seem to embrace anymore.

Whatever comes out of Bali will require public-private partnerships around the world to implement. Governments have to insure that “general welfare” is protected, while businesses will need to apply their creativity and agility to finding and executing “win-win-win” scenarios. Many companies, both large and small, are already doing this. What we need, more than anything, is political leadership that gets in front of these developments, and demonstrates to its citizens that fighting climate change is an economic (and political and social) necessity. As things stand now, we’ve got multiple interests competing against each other while their common enemy grows in strength.

The Bali conference addresses this dynamic on one front: governments have to align themselves to meet this challenge. But this is only part of the equation: whether at the national or international level, government and business also have to work together to human contributions to global warming. Let’s hope that Bali provides an impetus for cooperation that extends beyond the players at the conference, and to the variety of bodies and organizations that have a stake in addressing the climate crisis. Nothing less will work.

For updates on the Bali conference, see Bali Buzz, a “Virtual Press Room for the Bali UNFCCC conference,” and the Nature Conservancy’s “Bali Blog.”