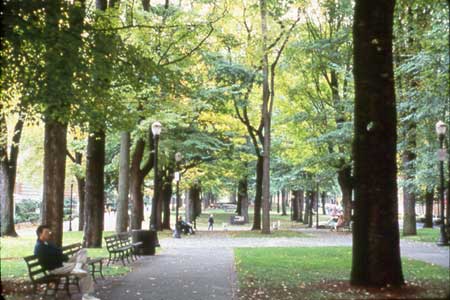 Via commonground, news that Baltimore, Maryland, has announced a plan to double the city’s tree canopy in the next 30 years:

More trees in Baltimore could mean lower energy costs, higher property values and many environmental perks, including cleaner water and air, according to local, state and federal forestry officials.

Across Maryland, municipalities are reverting to pastoral layouts after decades of blacktop school yards and concrete plazas.

A recent study by the U.S. Department of Agriculture showed that the city’s canopy, beyond its aesthetic value, saves Baltimoreans $3.3 million a year in energy costs by acting as a basin for storm waters, a bulwark against wind and a shade umbrella. Trees also cool the air around them through the evaporation of water from their leaves.

Baltimore’s trees remove about 10,800 metric tons of carbon from the air and water annually, according to the study.

So, now I’ve got that John Denver “Plant a Tree” song running through my head (yikes!), but what a great reminder that, despite some of the wonderful technological advances we’ve made towards a more sustainable future, nature’s often already equipped to do the job…