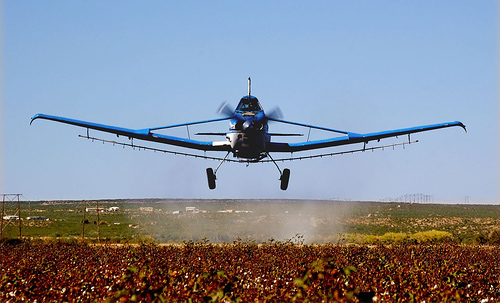 This article caught my eye from Change.org: current research shows that numerous banned chemicals, including DDT, are continuing to show up in US food supplies, even though they have been previously outlawed. These chemicals, which fall under the category of POPs, or ‘persistent organic pollutants’, take decades to break down and are capable of traveling through the air all over the globe. Just as worrisome is that these POPs, once they are ingested by humans and other animals, can reside in the fat tissue and raise the risk of cancer or other diseases, alter hormones, or reduce fertility or disrupt brain development.

Although levels of DDT and other pesticides have thankfully declined since the 1970s, it is difficult to precisely track the chemical levels in our food. The Scientific American reports:

Last year, as part of an ongoing study of POPs in the food supply, Schecter and his colleagues collected and analyzed more than 300 samples from supermarkets around Dallas, Texas. The samples were combined into 31 food types, such as yogurt, chicken and peanut butter, and tested for old contaminants as well as newer ones.

“Every food within this study contained multiple pesticides,” the authors wrote in a paper published in February in the journal Environmental Health Perspectives.

The danger of eating foods with low level chemical levels is not clearly understand, and it’s likely that the combination of chemicals can have an ill effect on human health and increase the risk of developing some diseases. How long will these chemicals remain in our food supply? And how can we possibly know that we are ingesting them? Unfortunately, it’s difficult to say. Nevertheless, the long term effects of spraying our food with pesticides is a terrifying reality.

On a related note, visit the MRL database to to learn what insecticides our government is allowing us to eat at certain levels, in certain foods. Check the food type and insecticide to see what our government considers safe levels of consumption.

Don’t want any pesticides or herbicides in your food? Organic’s the way to go, and we’ve got a broad selection of organic food in the Green Choices store: beans and rice, dairy products, baking supplies, nuts, and more…