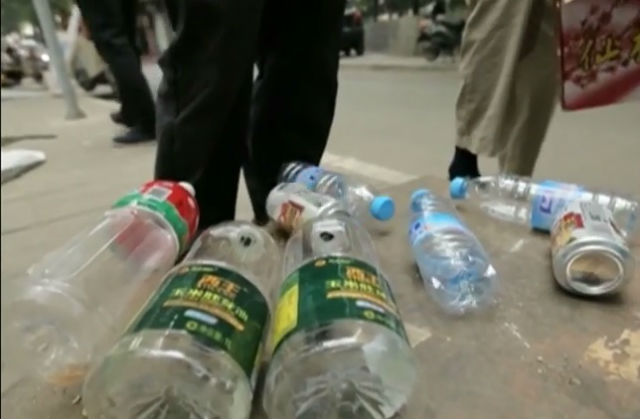 As we’ve seen before, recycling plastic water bottles and similar materials into more bottles represents a sort of gold standard in the industry: most plastics are “downcycled” into fabrics and fillers that can’t be further recycled. So, you’d think a company like Beijing’s Incom Recycling Co. would be buzzing with activity. After all, China’s huge population is moving up the socioeconomic ladder, and that means they’re creating more waste… there ought to be plenty of plastic bottles to keep Incom busy. But, as you’ll see in the video above from CCTV America, the company’s cutting edge machinery often sits idle.

In China, like much of the rest of the world, recycling provides a means for the poor to earn a little money. So, impoverished people in Beijing collect those plastic bottles… but they don’t take them to Incom. Rather, a recycling black market exist in the city (and throughout the country): buyers of the plastic don’t recycle it into more bottles, but melt it down – using crude, unhealthy, polluting methods – to sell as chemical fiber.

I never thought I’d see a battle for recyclables, but, apparently, there is one in China… so much so that the government’s gotten involved in trying to shut down the rogue operations (with some success). Obviously, companies like Incom have to figure out how to better reach the people collecting and selling these materials… no doubt some combination of better communication and higher prices, or even accepting other materials that dumpster divers and trash pickers would normally sell to the illegal recyclers. Otherwise, recycling – an activity that many consider the hallmark of individual environmental responsibility – just contributes to China’s incredibly unhealthy urban settings.

Watch the video above, and then let us know about any ideas you have to get plastic bottles moving towards companies like Incom… and away from “recyclers” just making things worse.