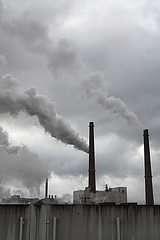 For perhaps the first time ever, U.S. businesses could be fined based on the amount of global warming pollution they emit. The Bay Area Quality Air Management District in San Fransisco has proposed a fine of 4.2 cents per metric ton of carbon dioxide (CO2) on every power plant, factory and even small business. CO2 is a major contributor to global warming.

The proposal would affect about 10,000 “stationary sources” of pollution and raise $1.1 million dollars a year in the Bay Area. While small businesses would pay perhaps $10 or less, the Shell oil refinery would be charged with $186, 475 per year for its annual emissions. Four other oil refineries, four power plants and a cement plant are the top emitters in the area. Even the San Fransisco International Airport would get $5,000 a year in fines.

Last April, the U.S. Supreme Court ruled that CO2 is a pollutant and can be regulated under the Clean Air Act. But don’t call it a carbon tax: Jack Broadbent, executive officer of the air district told the San Jose Mercury News that the fine is a cost recovery fee because the money would not go into a general fund, but would be spent on the area’s emission-reduction programs.

As expected, environmentalists like the Sierra Club are lauding the move while the oil industry says it will raise costs for consumers. And economists say that until there’s a price on carbon, we’re not going to cut emissions fast enough with only voluntary measures.
The final vote on the CO2 proposal will likely happen in May.
San Jose Mercury News