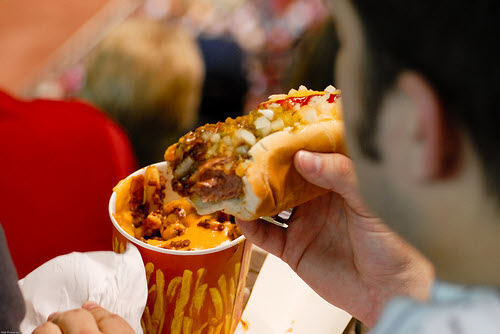 While we all may sing about “peanuts and Cracker Jack” during the seventh inning stretch, when we head to the food vendors at baseball parks, we’re more likely to go for hot dogs, burgers, bratwurst, etc. Unless you’re vegetarian, of course… and, in that case, you may just assume you’re going to go hungry during the game.

Turns out that’s no longer a safe assumption: numerous Major League Baseball parks are now offering veggie friendly options. Enough, in fact, that PETA has released a top 10 list of ballparks that make it easy for a vegetarian or vegan to enjoy the game without stomach rumblings.

No surprise that the San Francisco’s Giants AT&T Park gets the top nod. To check out the rest, see PETA’s ranking (as well as its list to the top minor league parks for meatless food), and Michael d”Estries overview at MNN.