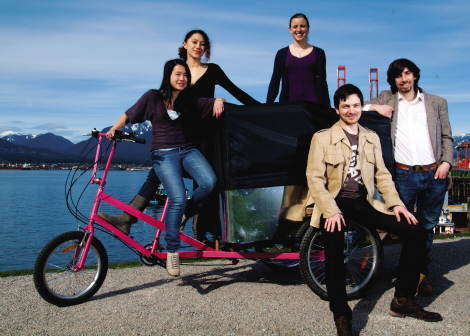 The notion of bike delivery isn’t particularly new: courier and messenger services have been around in urban areas for decades, even developing their own culture. Hauling larger loads by bike, however, is a concept that’s still catching on… the services we have seen on this front are relatively unique. A group of students from three British Columbia universities (Simon Fraser University, the University of British Columbia and the British Columbia Institute of Technology) have teamed up to join this budding industry… and to put ideas learned in a class on social enterprise into action.

Their company, SHIFT Urban Cargo Delivery Service, will launch on May 1st, and offer “last-minute delivery service in and around downtown Vancouver through sustainable means.” Specifically, they’ll use “heavy-duty cargo trikes” to transport just about any kind of load… up to 600 pounds.

As they’re in pre-launch, the company web site is still pretty sparse… but they’ve created both Twitter and Facebook accounts to show off their business concept, and to fill in followers on activity leading up to the day they open for business.

While this might strike you as kids engaging in a feel-good entrepreneurship, the idea has merit in terms of environmental impact and old fashioned traffic hassles… if you’ve ever gotten stuck behind a double-parked delivery truck, you know what I mean. According to a Dutch firm that has developed a similar concept, delivery trucks account for 20-30% of traffic congestion (with the associated environmental ills that come with it), and half of the time, those trucks are carrying less than half of their capacity.

Of course, their profitability will be based on their performance; given that bikes (even bigger ones like they’ll be using) have quite a bit more maneuverability in traffic, this seems like a good idea from that standpoint, also.

What do you think? Are cargo bikes and trikes an ideal solution for short-haul urban transport? Think they’re the basis of a promising business model? Let us know what you think…

Ready to start biking more now that it’s warming up? Check out our current selection of road bikes from brands like Fuji, Schwinn, Scott, and GMC