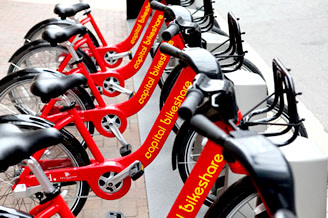 The prevalence of bicycles in a community is an indicator of our ability to provide affordable transportation, lower traffic congestion, reduce air pollution, increase mobility, and provide exercise to the world’s growing population. Bicycle share programs are one way to get cycles to the masses. 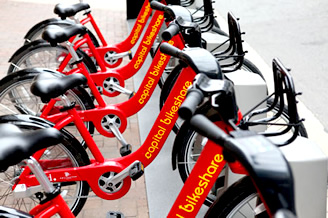 Spain leads the world with 132 separate bike-share programs. Italy has 104, and Germany, 43.

The United States hosts 36 modern bike-sharing programs. With a number of new programs in the works and planned expansions of existing programs, the U.S. fleet is set to nearly double to over 37,000 publicly shared bicycles by the end of 2014.

Since the Vélib’ system launched in Paris in 2007, the number of cyclists on the streets has risen 41 percent. Nearly 24,000 bicycles can be picked up at over 1,700 stations in the city and suburbs.

Bike-sharing cities are finding that promoting the bicycle as a transport option can lead to more mobility and safer streets for all.

Bike shares, lanes, and other bicycle-friendly infrastructure are a boon to local economies.

With more than half the world’s population now living in cities, there is tremendous potential for municipal governments and urban planners to increase bicycle use.

With annual memberships in most cities well below $100, bike sharing is far cheaper than the $7,800 average cost estimated by AAA to own a car and drive it 10,000 miles a year.

During the first year that people abandon regular driving to become a bike commuter, they can lose 10 pounds or more.