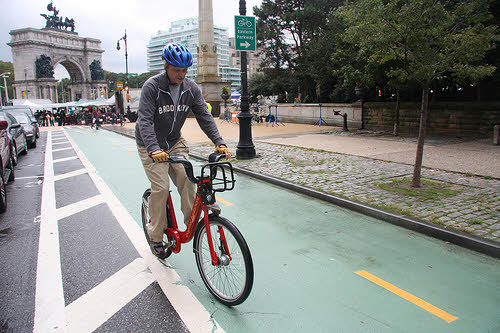 Bike Sharing in the US and the Americas

In the Americas, where the car has long been king, the first big third-generation bike-sharing program opened in Montreal in 2009. It now has 5,120 bicycles and over 400 stations, facilitating use of the city’s robust network of bike lanes and paths. Toronto plans to expand its 1,000-bike scheme, and Vancouver and Calgary, along with several other Canadian cities, are expecting to start programs in the next couple of years.

When Mexico City launched its Ecobici program with some 1,000 bikes in 2010, it quickly reached its limit of 30,000 annual members and started a waiting list of eager would-be cyclists. The program has since quadrupled in size and remains the largest of Latin America’s dozen or so programs. Most of these are in Brazil; in fact, São Paulo even hosts multiple bike-sharing ventures. In Argentina, Buenos Aires opened a pilot program in 2010 and currently has 1,200 shared-bikes, allowing more two-wheelers to brave the traffic, even crossing what is known as the world’s widest street. Santiago, Chile, currently has a program operating with 180 bikes at 18 manned stations in one city neighborhood, but later this year plans to roll out a larger automated system that could grow to 3,000 bikes at 300 stations within four years.

Throughout the United States bike-sharing programs are springing up at a fast clip; in fact it is hard to find a sizable U.S. city that is not at least exploring the bike-sharing option. As of April 2013, there were 26 active modern public programs in the United States, a number poised to double within the next year or two.

The largest U.S. program in early 2013 was Capital Bikeshare, with more than 1,800 bicycles spread across 200 stations in Washington, DC, and neighboring communities. Nice Ride Minnesota, which covers the Twin Cities of Minneapolis and St. Paul, was second, with 1,550 bikes at 170 stations. The Boston metropolitan area is home to 1,100 shared bikes. Miami Beach is planning to add 500 bikes to its current fleet of 1,000 as it extends into Miami this year. And Denver, which is looking to grow from near 500 to 700 bikes in 2013, is one of more than 15 public systems in the B-cycle family that give members access to bikes when they travel to different cities, including Madison, Fort Worth, Fort Lauderdale, San Antonio, Charlotte, and Kansas City.

Several of the new players coming online in 2013 will dwarf the existing American field. New York’s highly anticipated Citi Bike program is poised to roll out 5,500 bicycles at 293 stations in Manhattan and Brooklyn in May, with the ultimate goal of reaching 10,000 bikes. Chicago plans to start in June, ramping up to 4,000 bikes at 400 stations in 2014. Southern California will be rolling into bike sharing in a big way with programs opening in Los Angeles (4,000 cycles), Long Beach (2,500), and San Diego (1,800). In northern California, a pilot project of up to 1,000 bikes in San Francisco and Bay Area cities south along the rail line hopes to begin what could ultimately be a 10,000-bike program.

Impressive as these additions are, they are hard-pressed to hold a candle to some of Asia’s massive developments. According to Susan Shaheen and colleagues at the University of California at Berkeley, Asia got into the game in 1999 with a program in Singapore that lasted until 2007. The city now has two bike-sharing systems: one conventional and one run by a car-sharing company offering electric bikes. South Korea rolled out six programs between 2008 and 2010, including one in Changwon that now has 4,600 bikes and one in Goyang with 3,000. Japan, where commuters have a long history of using bikes to get to train stations (witness the 2.1 million bicycle parking spaces in the Greater Tokyo metropolitan area), has nine bike-sharing programs that began between 2009 and 2012. Taiwan, a high grossing bicycle exporter, has two bike-sharing programs as well. But it is the “bicycle kingdom” of China that is showing the world how big bike sharing can get.

In early 2013, China was home to 79 bike-sharing programs, with a whopping combined fleet of some 358,000 bicycles. According to a paper prepared in late 2012 for the Transportation Research Board’s 92nd Annual Meeting by Yang Tang and colleagues at Tongji University, expansions and new projects could soon balloon China’s public bike fleet to just under 1 million cycles.

The world’s largest bike-sharing program is in Wuhan, China’s sixth largest city, with 9 million people and 90,000 shared bikes. Wuhan recently claimed the number one spot from Hangzhou, which has 69,750 bikes in its bike-share scheme. Hangzhou launched mainland China’s first computerized bike-share system in 2008, integrating stations with bus and subway networks, allowing the same transit card to be used across all modes and granting extra free bike riding time with a bus transfer. By 2020 Hangzhou’s system could grow to 175,000 bikes.

The growth in bike sharing and bike infrastructure may help buck the pervasive motorization that has turned rush-hour roadways in China’s fast-growing cities into virtual parking lots. In Zhuzhou, after a program of 20,000 bikes opened in 2011, the share of trips made by bicycle—which had slipped to a meager (by Chinese standards) 5 percent—reportedly jumped to 10 percent. An estimated 70 percent of the bike trips were made on shared cycles. In Hangzhou, the cycling share dropped from 43 percent in 2000 to 34 percent in 2007, but then it rebounded to 37 percent by 2009 after bike sharing was introduced. In Beijing in the 1980s, more than half of all trips were made by bicycle; by 2007 this had fallen to 23 percent. Yet as more cars and trucks filled Beijing’s roads, the average car speed fell to less than 8 miles per hour in 2003, down from 28 in 1994. It is too early to gauge the impact of Beijing’s municipal bike-share program, which opened in 2012 with 2,000 cycles and plans to jump to 50,000 by 2015.

Bike-sharing cities are finding that promoting the bicycle as a transport option can lead to more mobility and safer streets for all. Bike-sharing programs are well positioned to hook people up with a bus or metro system, accommodating the last mile or so between home or work and mass transit. Having bikes ready to go on the streets encourages more people to try out biking, and once they experience its convenience, speed, and lower cost, they then advocate for further improvements to cycling infrastructure—like bike lanes, paths, and parking—making it even easier for more riders to join in. This “virtuous cycle” means that it is increasingly likely that bike sharing could soon show up in a city near you.

Stay tuned for a forthcoming release delving into more detail on bike sharing in the United States. Janet Larsen is the Director of Research for the Earth Policy Institute.