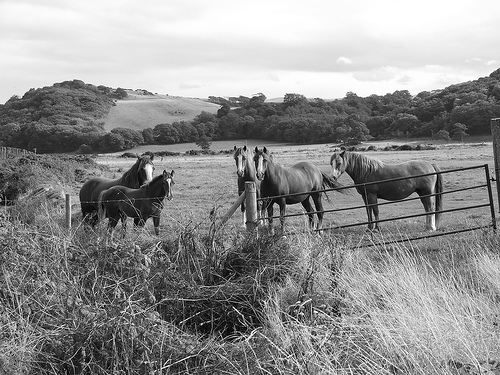 There is a great deal of controversy about the wisdom of diverting a significant percentage of the US corn crop into the production of ethanol to fuel cars.  Something like 25-30% of the crop will probably be used this way in 2011 which sounds alarming in the face of global food supply issues that have driven commodity prices to record levels.  Its not really quite that extreme because the fermentation to make ethanol only uses 60-65% of the corn and the remainder is used as a high protein animal feed called DDGS.  That means that at most 18% of the crop is going to this subsidized use.

As is often the case, it is useful to put this into historical perspective.  Consider the purple line on the graph below which shows that until the middle of the last century, US farmers devoted more than 40 million acres to growing a biofuel crop – oats for horses.  Yes, we powered much of our personal and public transportation, as well as the transport of goods, with the energy released by the bacteria in the digestive system of horses.  It certainly wasn’t a perfect system between flies and methane emissions from the horses stomachs and from the manure they deposited all over the roads.  Thus when the “horseless carriage” became available along with cheap fossil fuels, only romantics missed the good old days. 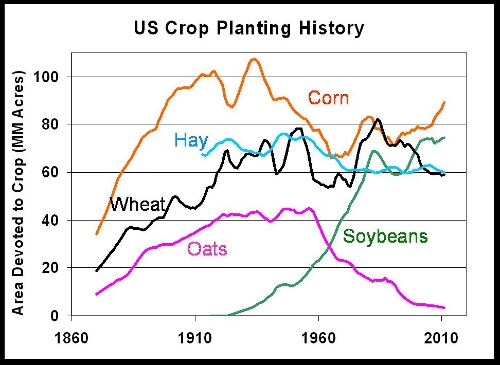 So, since the 1950s we have returned more than 40 million acres back to food/feed crops – more than twice the effective area going to ethanol today.  But that is only part of the story.  In the same sixty years we have quadrupled the total production of corn making the amount going to ethanol seem small by historical standards (see graph below). 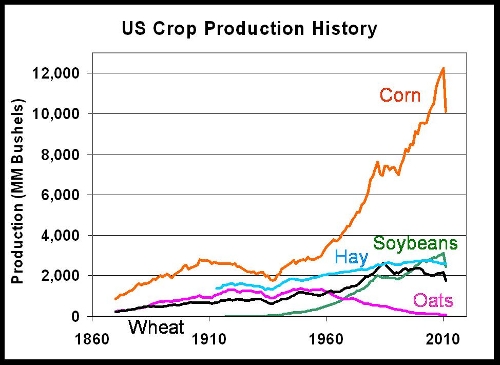 So, although the issues of food vs fuel, indirect land use, transition to next generation biofuels and the proper role of subsidies and tariffs are all important to consider, how we grow the corn is more important from a water pollution, energy, and greenhouse gas perspective (See “What I Hope Will Be The Future Of Sustainable Farming,” and “The Surprising Reason We Don’t Farm As Sustainably As We Could“).

Graphs based on 5 year running averages of historical data from USDA-NASS Quickstats1.  Horses image from leunix