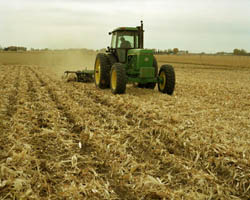 Written by Dr. Bill Chameides, dean of the Nicholas School of the Environment and lead author of the forthcoming blog The Green Grok.
This post is Part 1 of a 2-part series on biofuels. Today’s post looks at corn; Part 2 will examine the most promising biofuels.

Who doesn’t want to be green? But beware of automobile ads claiming environmental benefits from home-grown ethanol. Almost all U.S. ethanol comes from corn and, as a fuel, corn just isn’t as “amaizing” as they say.

“What if we could live green by going yellow?” one TV spot asks. “What if we could lower greenhouse gas emissions,” it continues, promisingly, “with a fuel that grew back every year?” Sounds great doesn’t it? Sorry folks, it’s just not so.

With corn ethanol, we are barking up the wrong stalk. This so-called yellow fuel is not green and the rush to it is misguided. The negatives of turning corn into fuel far outweigh the positives. First a little background.

A short history of ethanol

Ethanol has been around for a long time. Some of the earliest forms of life on Earth — anaerobic bacteria — used fermentation to produce ethanol and in the process extracted energy to drive their metabolic functions. In prehistoric times humans fermented grains and other biomass to make ethanol. Most of you have encountered ethanol in your lives — in beer, or wine, or the harder stuff. Ethanol is simply alcohol.

Using ethanol as a fuel dates back to the nineteenth century. It powered some of the earliest automobiles, including Henry Ford’s first car, the Quadricycle. Interest in reviving and expanding the usage of ethanol in cars today has grown, in part, because of its perceived climate benefit.

When we burn fossil fuel, excess carbon dioxide (CO2), the chief global warming pollutant, is released to the atmosphere. This, at least in principle, should not be the case for ethanol or other biofuels (fuels produced from plants and wastes). When ethanol is burned, its carbon is converted to CO2, just as in fossil fuels. But because the carbon in biofuels is pulled directly from the atmosphere via photosynthesis, it would seem that burning ethanol does not, in and of itself, represent a net source of new CO2 to the atmosphere. (See the Department of Energy’s diagram below.)

As it turns out, it’s not that simple.

Why ethanol is not effective at fighting global warming

To get the whole picture you have to consider ethanol’s entire life cycle — the energy inputs and global warming pollution arising from every step in the production process, such as:

• cultivating and harvesting the crop,
• refining the crop to ethanol, and
• its transportation to market.

Corn is a particularly hungry crop — it requires lots of water and nitrogen fertilizers. The application of fertilizers creates nitrous oxide. Though it’s called laughing gas in the dentist’s office, in the atmosphere it is no laughing matter — nitrous oxide is about 120 times more potent than CO2 at trapping heat.

As you can start to see, corn ethanol is ineffective at fighting global warming. A research team from Princeton University led by Tim Searchinger pointed out an obvious but little appreciated fact about biofuels in a recent study. Growing crops for fuel requires cropland dedicated to that purpose. That can create a market imbalance.

For example, the seemingly simple decision to grow corn instead of soybeans creates a demand for soybeans that can only be met by someone else adding cropland to grow soybeans. Typically this entails destroying important rainforests or grasslands. This transformation of land spews huge reservoirs of carbon stored in that land into the atmosphere in the form of CO2, leading to further global warming. It is mind-boggling but probably true: U.S. farmers growing more corn drives the destruction of tropical rainforests in Brazil as more land is converted to soybeans. Now that’s a global economy.

The Searchinger team’s results suggest that when land-use changes are factored into the equation any possible climate benefit from corn ethanol is canceled out. Searchinger’s models stunningly show that it would take 167 years of continuous corn ethanol production before it would begin to switch from a climate loser to a climate helper. That’s way too long to wait with global warming bearing down on us.

So, for the huge environmental price of growing corn for ethanol, what do we get? An increase in the very emissions we need to reduce — the precise opposite of what is needed.

The silver lining of biofuels: Degraded or abandoned land and waste

While ads might encourage you to go green by going yellow, I recommend caution. Given the present source of ethanol in the U.S., it is a bad environmental bet. Going yellow isn’t easy either. Sure you can buy an E85 car (one that runs on a mix of 85% ethanol and 15% gasoline). The car companies would love you to because they get a break from the federal government on meeting national fuel economy standards. But try filling your new car with ethanol. As of January 2007, there were only about 1,100 E85 pumps in the U.S. My own take on this is that we could accomplish a lot more, a lot faster by zeroing in on fuel economy.

So that’s the bad news about corn ethanol. But there is a bright spot on the biofuels landscape; it involves using biomass waste and growing feedstocks on land that stores very little carbon. We’ll discuss these solutions in our next post. Stay tuned.

Read more about Dr. Bill Chameides, Dean of the Nicholas School of the Environment and Earth Sciences at Duke University.