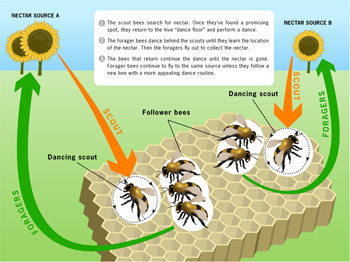 Inspired by the diverse kingdom also known as our biosphere, researchers are developing a new way to efficiently meet the demands of web users. The inspiration is derived from a very intricate yet communicative dance that honeybees do when they’ve found a hot spot of premium nectar. Since these bees have no central commander and highly inconsistent resources, they do a dance to communicate to each other how to efficiently collect a lot of nectar in little time. This “swarm intelligence” has been used as an inspiring model by researcher at the Georgia Institute of Technology to “improve the efficiency of internet servers faced with similar demand challenges”.

The efficiency development model helps servers that used to be assigned to only one task to now multitask and move between tasks as needed. In other words, the servers can now meet the fluctuating demand that the internet has more quickly. This model reduces the chance that a website gets overwhelmed with demand and locks up. It is also said to increase efficiency and service by 20 percent.

Georgia Tech professor Craig Tovey was struck with a curiosity of honeybee behavior in the early 80s. He realized through conversations with a colleague from the University of Oxford that “bees and servers had strikingly similar barriers to efficiency.” Bees have very inconsistent resources. Sometimes there is an abundance of nectar to collect and sometimes there is very little. Year after year the supply is different and the location of the nectar oasis’s change. Yet somehow, they always seem to maintain a fairly consistent supply of nectar in the hive. Tovey saw this as a stimulating intricacy in the natural environment that yielded very effective results. Tovey among other colleagues conducted research for decades on how they work and how to use their brilliance in our built environment.

The greatest breakthrough was the discovery of the waggle dance. Australian zoologist Karl con Frisch won a Nobel Prize for this. When bees that hit an oasis return to the hive, they do a dance at the hive floor, wagging their tail back and forth. Each movement of the dance indicates location, scent, sound and gives other foragers clues about where the oasis of nectar is.

Internet servers, on the other hand, are built for “normal” conditions. Since servers are designated for individual websites, they become fickle when there is an influx of demand. They get stressed and run out of computational capacity when the traffic on a certain website is high due to an online clothing sale, a sporting event, a political event… They don’t respond well to strain. The flaw resides in the fact that when the demand for one server swells, lots of other servers sit idle due to low web traffic on other sites.

Are you beginning to connect the dots? Well, Tovey and his colleague Nakrani did. They started to apply the “waggle” dance strategy to the idle servers. They developed a virtual “dance floor” for a network of servers to communicate demand and spread it across more workers. The way it works is an ad is posted on the “dance floor” to attract idle servers. The longer the ad is posted the more power the available servers devote, thus customers are met with quick and flawless service even during high demand times.

“When you work with biomimetics (the study of how biological principles can be applied to design and engineering), you have to look for a close analogy between two systems — never a superficial one. And this definitely fit the bill,” says Tovey. This is just another example on how evolving systems from the biosphere can serve as very clear simple models for innovation.