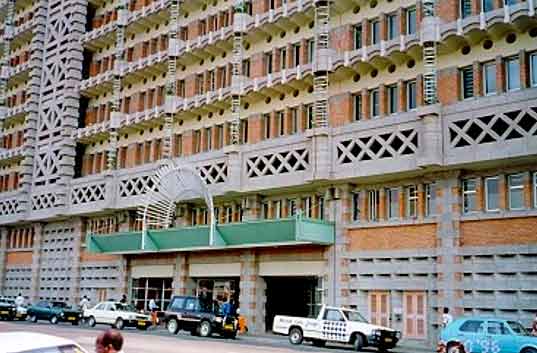 Add this biomimetic project to the board! Architect, Mick Pierce and engineers at Arup Associates successfully took inspiration from nature when designing the heating and cooling system of the Eastgate Centre in Harare, Zimbabwe, the country’s largest office and shopping complex. Where did they get this inspiration? African Termites!

If you’ve ever seen a termite mound you should still be impressed by these built by African termites in Zimbabwe. The termites build mounds reaching multiple feet in order to farm a fungus that feeds them. The finicky fungus must live at exactly 87 degrees F. While temperatures outside the mound walls vary by about 70 degrees F, they had a problem to solve. “The termites achieve this remarkable feat by constantly opening and closing a series of heating and cooling vents throughout the mound over the course of the day. With a system of carefully adjusted convection currents, air is sucked in at the lower part of the mound, down into enclosures with muddy walls, and up through a channel to the peak of the termite mound. The industrious termites constantly dig new vents and plug up old ones in order to regulate the temperature,” describes Abigail of Inhabitat.

As observed, this system works rather well. In reaction, Mick Pierce and Arup Engineers designed a system in the building that draws outdoor air in and heats or cools it against the building mass depending on which is warmer, the building or the air. The air is then vented into the building through the floors and exits through chimneys at the top.

The complex is made up of two buildings connected by a glass passageway that is open to the fresh air. As air is drawn from this space, fresh air is constantly replacing stale air. Not only is this healthy for the people inside the space, but nature is doing most of the work for us. Using less than 10% of the energy of a conventional HVAC system, this system has saved the owners $3.5 million over the last decade. Tenants also pay about 20% less in rent than surrounding office buildings.

Designers have used the principles of biomimicry across the globe since the beginning of time. Yet, since industrialization and our tendency to build economy while neglecting nature, we somehow lost sight of how simple things can be if we look to nature for inspiration. Only in nature can you can find self-adapting systems that have continued to reinvent themselves for centuries to reach maximum efficiency and thus survival. Janine Benyus, noted a “Hero of the Environment” by Time Magazine has brought this notion of biomimetic design back to the surface. Principle founder and author of “Biomimicry: Innovation Inspired by Nature”, Janine encourages us all to seek inspiration for living systems. The idea is to design objects; systems, processes, and spaces modeled after those that already exist in nature. “Studying a leaf to invent a better solar cell is an example of this innovation inspired by nature.”

Who knew termites could save you a dollar or two and provide the healthiest solution? Not me. But as a designer, it sure does make me want me to look outdoors for help more often.