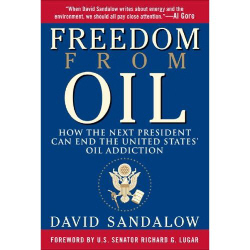 The phrase “oil addiction” has been uttered and written countless times since George W. Bush used it in his 2006 State of the Union address. While many still rightly question the current President’s commitment to ending US dependence on oil, David Sandalow, assistant secretary of state and senior director on the National Security Council during the Clinton administration, notes that the concept of “oil addiction,” and the failure to address it substantively, both predate the current administration. His new book, Freedom from Oil: How the Next President Can End the United States’ Oil Addiction

, traces the use of the phrase back to the Nixon administration, and observes that every president since has struggled with the concept… and ultimately failed to do anything to address it.

Despite his political leanings, though, Sandalow’s purpose in Freedom from Oil isn’t to criticize the current administration, or to bemoan the overall lack of progress in lessening American dependence on oil. Rather, he sets a much more daunting challenge for himself: illustrate how the US can overcome its dependence on this resource that’s responsible for environmental damage, security concerns, and economic indebtedness to some of the world’s most unsavory governments. In presenting his ideas, Sandalow deftly illustrates the depth of our oil addiction… and the complex circumstances any administration will have to address in order to set the country on a path towards a low-carbon energy future.

That complexity could lead a reader to expect a dry, even dull, policy tome, but Sandalow manages to demonstrate not only his very impressive mastery of the subject matter, but also an ability to present it in a compelling context for almost any reader. He creates a fictional situation for framing the topic: a new President (perhaps the next president) wants to give a major speech on the topic of oil addiction, and assigns advisers and cabinet members to write memos containing background information and policy recommendations on topics as varied as oil’s impact on national security, plug-in cars, “smart growth,” and diplomatic strategies. These memos, as well as responses to them, form the bulk of the book’s content; Sandalow also includes “short profiles of nine extraordinary individuals,” including venture capitalist Vinod Khosla, Tesla Motors founder Martin Eberhard, the Apollo Alliance’s Jerome Ringo, and “Senator-Farmer” Jon Tester.

By creating this framework, Sandalow not only demonstrates the broad consequences of American oil dependence, but also shows the competing interests that emerge from addressing the topic, and the political landmines that the fictional president must confront in order to create a coherent set of policies and goals. Controversial topics including increasing domestic oil production and coal mining, moving towards a “hydrogen economy,” raising the national gasoline tax, and sequestering CO2 emissions. Many readers won’t agree with the conclusions reached by the “characters” in the book; few, however, will be able to argue that the claims made and facts presented aren’t both compelling and disturbing.

Sandolow himself makes clear that the conclusions reached in the “president’s” speech aren’t “the only answers to the problem of oil dependence… They are an attempt to grapple with one of the most challenging questions of our times.” Throughout the book, he makes clear that no political party or politician has all the answers to this issue. Any party or candidate who’s being honest with their constituents, though, will not only have to address this issue, but also exhibit genuine leadership and courage to change the course we’re on. As Bill Clinton once said during his ’92 campaign, “The definition of insanity is doing the same thing over and over and expecting a different result.”

Freedom for Oil includes a forward by Republican Senator Richard Lugar, and leaders from both side of the aisle, including former Vice President Al Gore, and former head of the CIA James Woolsey, have praised it. Oil addiction is one of the few problems upon which politicians of all ideological stripes agree… now it’s time to act on that agreement.