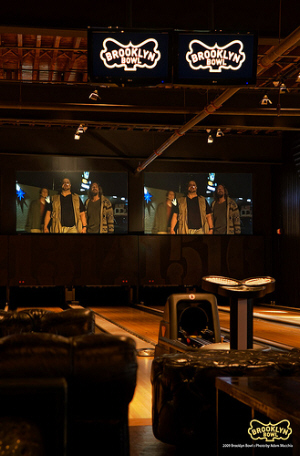 Picture a bowling alley, and you likely come up with images of tacky shoes, greasy food, and lots and lots of beer bottles. Energy efficiency, reuse and recycling, and local food probably don’t come to mind at all — we’re talking about The Big Lebowski, not Garbage Warrior. Brooklyn Bowl, which opened in July in New York City’s Williamsburg neighborhood, is out to change those associations, though. On Tuesday, the bowling center, music venue, and restaurant got a boost in those efforts from the U.S. Green Building Council, which awarded Brooklyn Bowl LEED certification.

So, what’s does it take to get a bowling alley certified as a green building?

Bamboo lanes? Organic cotton bowling shirts? Low-VOC antiseptic spray for the rented shoes? Nope… Brooklyn Bowl took practical steps to create a chic entertainment venue with a low impact. Located in an old iron foundry, the business’ owners  not only took the standard steps to “green” the building — minimizing energy and water use, reclaiming and reusing materials, and preserving air quality — but also implemented some technologies relatively unique technologies, including

From the photos available, it looks like they didn’t skimp on design in creating a green environment… and it looks like free bowling and live music are regular early-evening features.

Brooklynites: had a chance to check out Brooklyn Bowl? Let us know what you think…