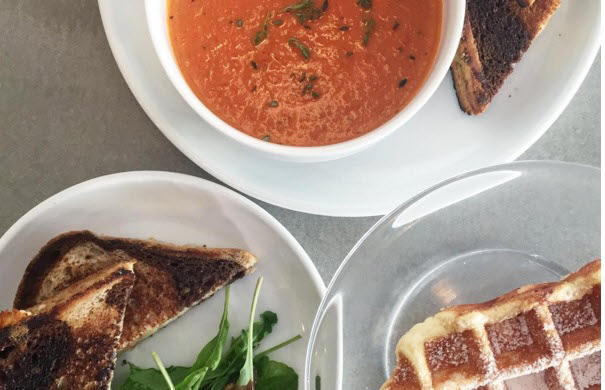 Customized events, such as weddings, corporate events and private celebrations, are usually accompanied with delectable menus. And like any catering company, Saucy by Nature, takes pride in serving its guests high quality, locally sourced ingredients. It all sounds appetizing until you think of the tons of waste acquired from such made-to-order events.

Owner and chef Pzemek Adolf explained in this article featured on Eater’s website, “We ended up with all these surplus ingredients. You may order a case of zucchini but not use a third of that.” You do the math, and you’ll too realize that’s a lot of squash that could be headed for the local landfill if it isn’t eaten very soon. But Chef Adolf’s excess food problem became his solution. Adjunct to the catering company, he opened a zero-waste, 20-seat restaurant by the same name in September.

Adolf and his team of chefs meet after each catering event to discuss which foods were not used and how they will be served in the restaurant the following day. The lunch and dinner menus change daily depending on the available ingredients. Guests initially may be leery of the concept, but once they read the menu of upscale yet familiar dishes, they’ll want to dig right in. The restaurant’s brown sugar and sesame glazed Kabocha sqush, jerk pork belly with cider and pears and grilled corn, and tomatillo bruschetta are enough to entice anyone’s taste buds!

Saucy By Nature understands a zero-waste concept is more than serving up tasty dishes. They also compost their food scraps, recycle plastics, paper and metal, and donate leftovers to food pantries. As more chefs and restaurateurs join the movement to reduce food waste, there may be a chance of curbing this global problem.

Business Owners Are Making Money and Upholding Their Values

Restaurants are as unique as the people who open them. We’ve seen vegan, vegetarian and now waste-free restaurants be financially successful and honor their values. It’s refreshing to know that business owners don’t have to trade one for another. Last year, Chicago-based Sandwich Me In received praises in the blogosphere for its commitment to composting and recycling, despite the city not offering these services. The sandwich shop has produced approximately eight gallons of trash over its two and a half years of cranking out mouth-watering subs. This is mere scraps compared to typical restaurants that produce an estimated eight gallons of trash per hour every day.

Rub & Stub and The Real Junk Food Project are two other restaurants changing the food industry with their business models of “rescuing” food the trash. They serve up donations from supermarkets and eateries that can’t be cooked at local soup kitchens.

Have you ever eaten at restaurant that transforms leftover food into new dishes? Do you know of a zero-waste restaurant that we should share with our readers? Find out more about Saucy’s ever-evolving menu options on their Facebook or Instagram pages.