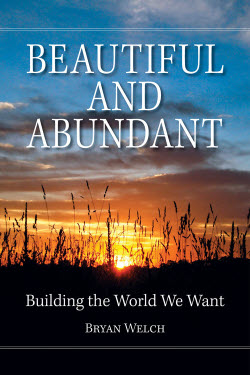 Author’s note: More and more, I’m privileged with the opportunity (and challenge) of reviewing a book or other work by someone I’ve come to know; that’s the case with this review. Bryan is a friend, and someone I admire — those facts, no doubt, color my perception. I hope you’ll take the time to read Beautiful and Abundant, and share your own thoughts… whether you agree with my opinions or not.

Though the “English professor” part of my “English professor turned green blogger” personal brand becomes a smaller and smaller part of the equation over time, it kicked in pretty early while reading Bryan Welch’s new book Beautiful and Abundant: Building the World We Want (affiliate link). No, I didn’t get the red pen out to correct grammar (no need); before finishing the first one hundred pages, though, I did start to think of Bryan’s main argument in terms of grammatical structures (and bear with me here… no lessons on participial phrases or pronoun reference coming). So many of the points we environmentalists (as well as our opponents in debate) try to advance take on an “If…then” structure: think “If we don’t reduce carbon emissions, then we’re heading for catastrophe (or “If we do reduce carbon emissions, then we’ll kill the economy”).

While Bryan’s book covers a wide range of topics and issues, he argues overall for a “both… and” approach to thinking about sustainability: human beings are both “unique and brilliant creatures” and a part of the larger natural order. Facing challenges requires both reason and imagination. And we can create ways of living that both lighten our impact on the planet and create beauty and abundance.

Bryan’s in a unique position to deliver such a message, as he’s the publisher of Ogden Publications (which owns titles such as Mother Earth News, Natural Home, and Utne Reader), and a small farmer and rancher: his family’s 50-acre Rancho Cappuccino homestead sits a few miles outside of Lawrence, Kansas. These two roles create tensions that might make the typical ideologue’s head explode: as a publishing executive of many “green” magazines, he logs a lot of flight miles. As a rancher concerned about animal welfare, he works to create a humane, natural setting for the goats, cattle, and sheep he raises… before sending them to slaughter. And as a business person concerned with making a profit for his investors, he realizes that some of the challenges we need to face — population growth particularly — present real impediments to economic growth (which he argues we also need).

Those of us most convinced of the rightness of our convictions and choices might be tempted to point fingers, and start with the “if…then” criticisms involving carbon emissions, resource use, and even meat consumption (or forced family planning, economic stagnation, and traditional notions of progress). Bryan, however, uses his own life experiences, as well as data and information from experts such as Lester Brown, Wes Jackson, and Derrick Jensen, to argue for a different context for evaluating our actions. Drawing on the Quaker’s tradition of queries designed to “shape their daily behavior without blocking out people who don’t share all their beliefs,” he posits four queries that allow us to examine the impact and well-being created by our choices and actions:

Bryan notes that the Quakers’ spiritual queries rarely result in unqualified answers of “yes”… and that’s also the case for his queries designed to assess our visions of a better world. He demonstrates this through application of these questions to a wide range of issues, institutions, and technologies, as well as to his own ventures at Rancho Cappuccino and Ogden. He illustrates his own thought processes by drawing in examples from art, philosophy, and political science.

These questions also form the basis for a series of “meditations” throughout the book. From a “murder mystery” involving dead sheep to a exploration of the hologram as a metaphor, these meditations both demonstrate the author putting the queries into action, and contribute to the book’s organic structure. Yes, there’s plenty of thoughtful, logical argument in this book… but there’s also a bit of deliberate “muddling” (in Warren Johnson’s sense of the term). Recollection and reflection blend with argument; warmth and humor appear alongside hard facts. And Bryan’s not afraid, at times, to use the three words many non-fiction writers avoid at all costs: “I don’t know.”

Beautiful and Abundant is one of those works that could bridge some of the divides that exist over sustainability issues; it’s also a book that will likely draw some fire from both sides of the ideological spectrum.  A thoughtful reader, however, won’t take away more ammunition for his/her view of the world, or even answers to the the challenges we face. Rather, s/he will leave the book with questions… but the kinds of questions that lead to more hopeful, compelling, and sustainable visions of what “a better world” might look like.

Ready to read more hopeful visions of a sustainable future? Check out selection of books by Paul Hawken, Lester Brown, and Ray Anderson.