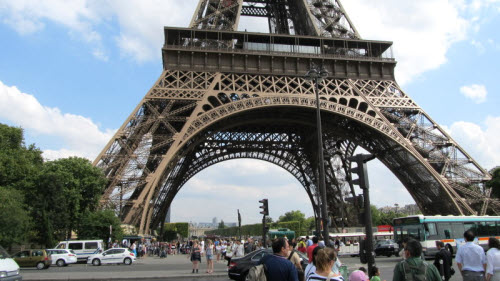 France has stated in the past that they would love to be the leader in eco friendly living. Imagine the kind of statement that would be made if they had covered the Eiffel tower with 600,000 plants. French company the Ginger Groupe (which specializes in eco design and engineering) has had a proposal in the works for about 18 months. The team has been working hard on this concept of turning one of the world’s most popular attractions into a “living tree.”

This idea is intended to have thousands of hemp sacks filled with soil and a variety of 48 seedlings that would be attached to the tower. It would be irrigated through a 12 ton grid of interconnected tubing; the plants would be mature by the year 2014 and then removed a few years later. The concept is very similar to green walls or “vertical gardens” that are becoming pretty popular these days. According to Ginger Groupe’s calculations, this Eiffel tower installation would remove 87.8 tons of carbon dioxide from the air and is estimated to cost 97 million dollars.

I could understand why this company might make such a bold proposition. Europe has been known for their serious air pollution problems. In fact, according to a recent report by the European Environment Agency, air pollution has caused more than 100 billion Euros (134 billion US dollars) in health and environmental damages. Europe’s 10,000 largest power plants, refineries, manufacturing combustion and industrial processes are mostly to blame among other factors. It appears to me, Europe needs to focus on alternative energy and promoting a greener lifestyle within its society.

Ginger Groupe has the right idea for this “green tower” proposal: although it may not be the most efficient answer to the air pollution problems it would send a pretty big message out there. With the 7 million people that pass through to view the “Iron lady” every year, it could make a significant symbolic impact. This proposal certainly has been a controversial one, even for green enthusiasts. The idea has great intentions but personally, I think there are other ways that 100 million dollars could offset carbon emissions. Sprucing up nearby parks, solar panels, renewable energy, green roofs and walls are just to name a few. Many people are arguing that the Eiffel tower would be completely stripped of its beauty and that the shrubbery would only hide the exquisite architecture that has been a major monument in the city and in history for over a century. Ginger made this statement “Our objective is to enhance the structure, not ruin it. We want to turn an emblem of the industrial past into a beacon of the sustainable future.” It almost seems wrong to go against that statement but in the words of the famous American historian Alfred Griswold “The only sure weapon against bad ideas is better ideas.”

This whole turning the Eiffel tower into a “green monument” idea sounds unlikely to happen but surely the city council can consider another effective way to address their environmental issues. Concentrating on renewable energy would be a good place to start and educating residents on eco friendly living practices through media and green incentives would also help. What are your thoughts on the Eiffel tower becoming a vertical oasis spectacle? What are some better ways that the city could go green?

Angie Tarantino is a contributor and part founder of the environmental blog. She covers animal rights and green tips and lives in the San Francisco Bay Area in California.