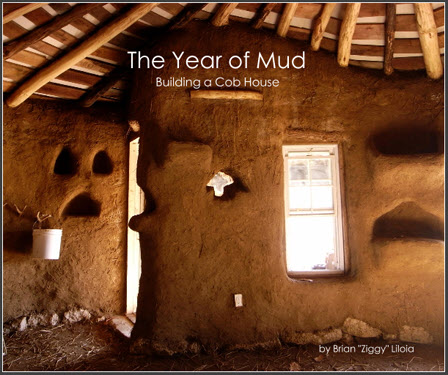 If you’ve followed posts by frequent contributor ziggy, you know he’s a hands-on kind of guy: from butchering his own meat to building a cob pizza oven, he’s an extreme DIYer even at Dancing Rabbit (where doing it yourself is pretty much the norm).

His biggest project, though, is his own home: ziggy built his own tiny house at DR with cob (a building materials similar to adobe). He documented the process on his blog The Year of Mud, and has now turned those posts, plus ample photos taken of the project, into the book The Year of Mud: Building a Cob House.

Like everything else he’s covered for us, the book is a DIY project: he self-published it through photo book publishing service Blurb. The “official” synopsis describes the book as “one novice builder’s story of building his first cob house, a home constructed largely of natural, local materials, many literally straight from the earth and surrounding ecosystem.” ziggy described the book to me as a “Lots of images (60+ color photos), cob building lessons and recipes, a detailed report of how I built my house, and more…”

I usually don’t write about book unless I’ve read them, but given that I know ziggy’s writing, and have seen the house myself, I have no problem giving it a plug here. If you’re thinking about trying out natural building at some level, I’m certain you’ll find it both inspiring and useful.

You can get a look inside the book through an 11-page preview… if you decide to buy it, let us know what you think.

Ready for Spring cleaning? Check out our listings of chemical-free steam cleaners, including the Shark Handheld steam cleaner, the Eureka Enviro Steamer, and the Bissel Steam Shot.