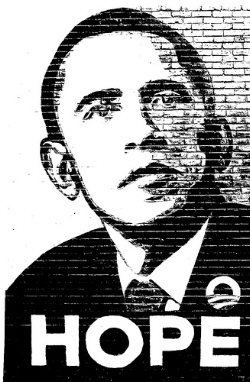 Like many of my fellow citizens, one of my first thoughts after hearing Sen. Barack Obama declared the winner of Tuesday’s election was “I am so proud to be an American.”

Yes, my guy won. Yes, the United States elected it’s first African-American president (and that’s an incredible step forward). Yes, the issues that matter to me (and likely to you) will receive much more attention than they have over the past eight years. All of these are reasons to celebrate.

But, even more important, and more critical to our near- and long-term future: hope won.

While that sounds like a nice, abstract, feel-good statement, I don’t think we can underestimate the notion that Tuesday’s election came down to a choice between hope and fear. Let’s face it: the choice of Obama to lead the country for the next four years was risky. He proved his intelligence, eloquence and resolve during the campaign, but he’s still a relative newcomer to the national stage. He faces Herculean challenges upon entering office: a financial and economic mess, two wars, and, yes, monumental environmental threats… to name a few of the most pressing issues. And, of course, he has critics ready to pounce hard on the slightest perceived misstep.

Americans knew these things as they entered the voting booths on Tuesday… and yet the majority still chose Senator Obama over the much better-known Senator McCain. And while we can parse decisions and actions made by each candidate and his representatives, I really want to believe that what Americans voted for wasn’t simply a man, a party, or a governing ideology, but rather the spirit embodied in the exclamation “Yes we can.”

That spirit, I believe, is where the potential for bridge-building comes in. The Obama campaign tapped into a fundamental American belief: we, as a nation, as a community, as a diverse group of fellow citizens, can overcome the challenges that face us. It’s the same spirit that President Kennedy leveraged when he challenged the country to put a man on the moon within a decade, and when he instructed Americans to “ask not what your country can do for you; ask what you can do for your country.” And, yes, it’s the same spirit that Ronald Reagan tapped with the “morning in America” theme of his first campaign. Despite some ugly periods in our history born largely out of fear, we tend to return to hope and optimism, and even act accordingly.

As the initial joy of Obama’s election gives way to recognition of the hard challenges we face, I think it’s so important to remember that this spirit of “Yes we can” won this election. As environmentalists pushing for action on climate change, loss of biodiversity, resource depletion, and pollution,  we have a lesson to (re)learn here: hope inspires while fear paralyzes. While we can never forget the potentially cataclysmic consequences that could result from failing to address environmental challenges, we’ll make more progress by appealing to hope, possibility, and shared service rather than fear.

As we work to build those bridges to individuals and groups that distrust us, we should remember that people want to feel empowered… regardless of their party affiliation. As we reach out, let’s focus on empowering our fellow citizens. Let’s show them the potential for abundance that comes with shifting our country, and our communities, in more sustainable directions… and doesn’t have to mean abandoning their core values.  Let’s push for action from our new President, and our national, state and local governments, but always remember that individuals can also make big differences as entrepreneurs, community activists, volunteers… Let’s listen to what motivates people different from ourselves, and engage our creativity to find ways to harness those motivations. And let’s not forget that over 60% of our fellow citizens cast their votes based on economic concerns, and have faith in the idea that we can meaningfully address environmental challenges in ways that create prosperity and opportunity.

Yes we can. The Obama campaign narrative set a high bar for us… but we’re up to it. We’ve proven, once again, that we’ll choose hope over fear… now, let’s follow that choice up with meaningful, thoughtful and cooperative action. Hope is renewable… our challenge, our responsibility, is to insure that hope is sustained.

And… if you didn’t see President-elect Obama’s speech on Tuesday, the entire text is up over at The Inspired Economist.

Image source: jetheriot at Flickr under a Creative Commons license