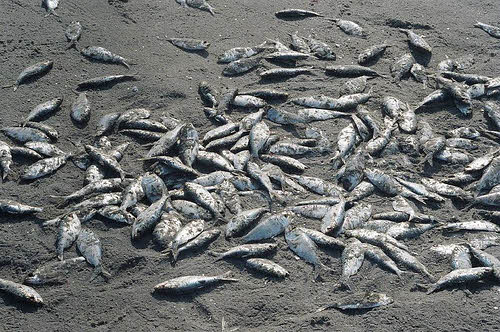 The waters of the Northeast United States have helped nurture this country since the first settlers arrived hundreds of years ago. Some of the most historic and successful commercial American fisheries ply these waters in search of cod, flounder and haddock. But in their search, these fisheries haul in more than just these targeted species, often netting dolphins, sharks and even whales as unintentional catch or “bycatch.” In a new report released last month, Oceana has identified nine of the worst fisheries in the U.S. for bycatch, which combined throw away almost as much as they keep and injure and kill thousands of marine animals every year. These nine fisheries all use one of three gears –trawls, gillnets and longlines-and account for more than 50 percent of the waste in America’s commercial fisheries.

In many cases, fishing vessels in these areas discard up to one-third of what they catch, tossing back thousands of other animals every year that are often dead or dying. But bycatch encompasses more than just netted seabirds and dolphins. The term also applies to unwanted fish species, like valuable cod, flounder and haddock that are discarded by trawl and gillnet fisheries in the Northeast.

The New England and Mid-Atlantic Bottom Trawl Fisheries, which drags trawl nets as large as a football fields across the seafloor searching for cod, flounder and haddock, throws overboard more than 50,000,000 pounds of fish every year and discards 35 percent of its catch.

The New England and Mid-Atlantic Gillnet Fisheries also struggle with chronic bycatch. Using walls of invisible netting up to nine miles long to target cod and haddock, gillnet fisheries are estimated to kill more than 2,000 other marine animals like dolphins and sea turtles in the process. While catching already threatened animals, these fisheries are also depleting fish stocks and undermining the management of these species, risking some of the very stocks fishermen are pursuing.

Fortunately, there are solutions to this problem and real examples of on-the-water bycatch control that should be replicated across the country. Oceana has developed an approach to describing and limiting bycatch called cap, count and control, a three-pronged policy that works to reduce bycatch through accurate counting of all species caught (not just targeted fish), setting science-based fishery quotas and controlling the amount of bycatch through gear modifications, bycatch caps and other new fishery technologies. In some fisheries in the northeast like the Atlantic scallop and herring fisheries, this approach has been adopted and has been proven to be very effective in controlling bycatch and keeping fishermen on the water catching their target species.

Bycatch is an immense problem that is jeopardizing our ocean resources and undermining effective fisheries management. This amount of waste not only harms ocean wildlife and wastes important food resources, but it also undercuts the economic success of our nation’s fisheries. Improvements must be made in accurately reporting bycatch and reducing the amount of fish that are discarded at sea to ensure the future of a healthy and balanced ocean ecosystem.