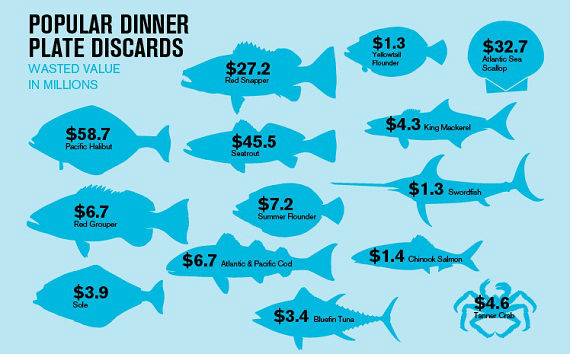 When most people think about the fishing industry in the United States, images of single boats braving the elements out on the water might come to mind. What many people may not realize, however, is that fishing is big business, and the amount of waste occurring every day in our nation’s fisheries could significantly impact our oceans and our economy. In fact, according to a new report by Oceana  titled Wasted Cash, U.S. fishermen could be losing $1 billion in revenue every year due to wasteful discarding.

The staggering amount of fish thrown away every year in the U.S. represents a real loss, both to fishermen and the future health and balance of ocean ecosystems. Fishermen in the U.S. discard approximately 20 percent of what they catch, with some fisheries actually throwing away more than what they keep. Fishermen discard fish for three main reasons: the fish are too small, are poorer quality or have low market values, or seasonal quotas have already been reached.

According to government estimates, fishermen throw away 2 billion pounds of fish annually, including many species consumers regularly find on their dinner plates. Bycatch, the capture and discard of non-target fish and other ocean wildlife, is one of the biggest threats facing marine ecosystems around the world. Only recently, however, have we begun to look at the economic cost of all of this waste to fishermen, which includes lost time sorting unwanted catch, ruined gear, loss of access to abundant fishery resources, and diminishing fishery populations.

The data in Oceana’s new report was calculated by multiplying the most recent bycatch data from the National Marine Fisheries Service by the price per pound of discarded fish — and the results are astounding, with bycatch costing fishermen as much as $1 billion annually. According to a recent study in Marine Policy, lost revenue from bycatch also translates into 60,000 fewer jobs per year for the fishing industry, which includes communities that have been experiencing rising fuel costs and diminishing profits for decades.

This new report also reveals how often fishermen are discarding edible (and valuable) fish, including many popularly consumed seafood species. In 2010 alone, $1.3 million worth of swordfish and almost $59 million worth of pacific halibut was wasted. The price per pound of discarded fish was found to be the highest in the southeast region, which also includes one the most wasteful fisheries in the country—the southeast shrimp trawl fishery. Shrimp trawling often employs nets as wide as football fields to catch tiny shrimp, resulting in very high bycatch rates and tens of thousands of captured sea turtles.

In many cases, fishermen have the means and knowledge to take waste out of the equation, but they lack the economic incentives to do so. In order to reduce waste in the U.S. fishing industry, the incentives need to be realigned to make reducing bycatch the desirable outcome. Examples of possible economic tools include individual or pooled bycatch quotas, landings fees, risk pooling, or assurance bonds that have been implemented in other countries to encourage fishermen to adopt better practices.

However, one of the best ways of reducing waste is ensuring the unintended catch stays in the water in the first place. This can be accomplished by fishing at certain times of day or in certain places to avoid bycatch hotspots, or by modifying fishing gear by using excluder devices to protect turtles or certain kinds of fish.

Although this is a widespread problem, bycatch can be avoided through good monitoring, using the right technology, and strong fisheries management regulations. Reducing bycatch will be beneficial for both fishermen and the health of the oceans into the future.

Amanda Keledjian is a marine scientist at Oceana, the largest international advocacy group working solely to protect the world’s oceans.