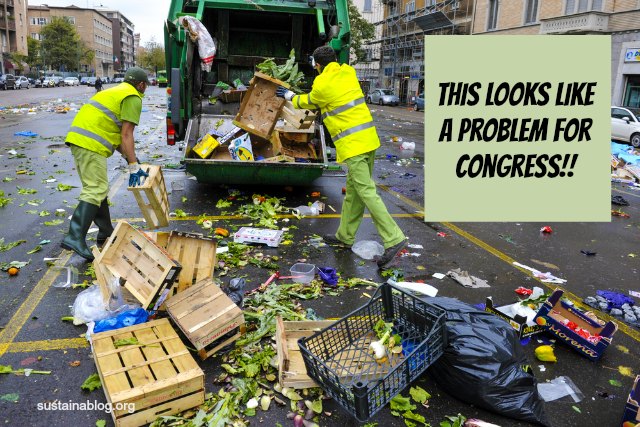 Ever thrown $125 in the trash? Or the fireplace? Flushed it down the toilet? Of course not – that would be nuts. But, according to Maine Congresswoman Chellie Pingree, every family in America does just this… and they do it every month. How? By contributing to food waste in America, which costs all of us $160 billion every year.

Pingree isn’t just tossing this figure out there, but rather using it as a wake-up call for Americans… as well as an attention-grabber for introducing her Food Recovery Act (HR 4184). The bill, introduced in early December 2015, would address the problem of food waste up and down the chain of production and consumption. While the bill would regulate our habit of sending 40% of our food to the landfill, it would also create multiple incentives for making use of this resource to feed the hungry, power ourselves, and reduce grocery “shrink.”

Recognizing Food Waste In America As a Misuse of Resources

How would one bill do this? The Food Recovery Act doesn’t shy away from the complexity of the food waste challenge, and offers an equally complex approach to making the most of our food. Among the areas addressed in this bill:

Farm waste: Most of us don’t realize how much food gets tossed on the farm; Pingree’s bill would discourage this waste in a number of ways. Farmers could earn a tax credit for donating edible food that would otherwise go to waste. The government would continue to support waste-to-energy and composting facilities for food that could no longer be eaten.

Retailer waste: Grocery stores often end up tossing perfectly good food because of expiration dates that aren’t expiration dates, but, rather, manufacturer suggestions. The Food Recovery Act would regulate the wording of these kinds of dates, as well as require accompanying language noting that the dates are suggestions. Retailers would also be protected by stronger Good Samaritan provisions for the donation of edible food, and encouraged to do so with greater tax incentives.

Government waste: The federal government, as you might imagine, buys a lot of food… and a lot of it also gets wasted. The Food Recovery Act would establish an office for managing intra-government food waste, and add requirements for contractors to responsibly dispose of leftovers and overstock.

School waste: a lot of food goes to, and gets wasted in, school lunch programs. Pingree’s bill would encourage the purchase and use of “ugly” produce by schools, fund educational efforts for students, and strengthen connections between schools and farms.

That’s not everything: again, this is a very comprehensive approach to handling food waste in America. Take a look at the bill summary (or, if you can handle reading legalese, the bill text), and share your thoughts with us. If you feel so moved, show your support by signing a petition Pingree created at Credo Mobilize. Do you think such a proposed law has a chance of passage given current political realities (including the presidential race)?