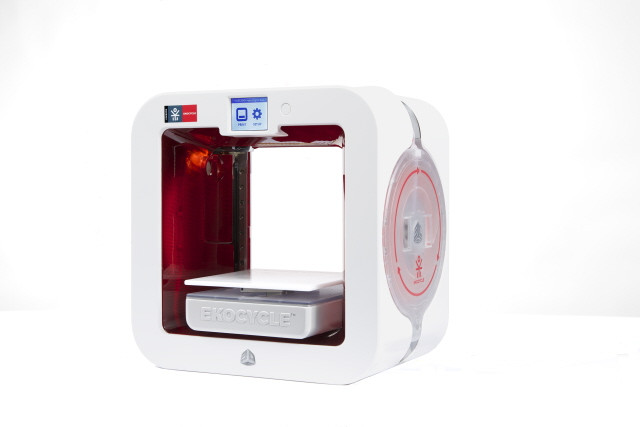 As Adele Peters noted earlier this year over at Fast Co.Exist, 3d printing has developed a reputation for being green… but doesn’t necessarily deserve it. Sure, it minimizes some waste, and saves some transportation emissions… but, as currently configured, the energy used to melt plastic filament will likely cancel out any waste reduction on those fronts. What if you shifted to a filament made from used plastic? Maybe even used plastic harvested from the ocean? That’s certain a step forward… right?  What if a home 3d printer used waste soda and water bottles to print products? That also seems like an environmental win… doesn’t it?

That’s the premise of the EkoCycle Cube, a 3d printer from Cubify/3DSystems. Company creative director Will.i.am explains the benefits in this short video:

Impressed? Ready to go out and spend $1200 on your own home 3d printer? I’ve got to admit, I’m a bit underwhelmed… a feeling similar to what I had with Coca-Cola’s other bottle reuse project, 2nd Lives. While watching this video, or browsing the webpage for the Ekocycle, I can’t help but think “I don’t see anything here that I want to be able to make… and if I did want it, I’d go to the dollar store.”

Does that mean that 3d printing itself is a lot of hot air? Not at all: there are some pretty amazing things going on with it in terms of next-generation manufacturing, health care, and scientific research. I know its being used extensively by designers for building prototypes and models (though some still prefer clay). I’m just having difficulty seeing this technology serving genuine needs at the consumer level… and I can’t think of any reason to describe such innovations as sustainable.

Maybe I’m just being an unimaginative grump, though. If you think that a home 3d printer might open up some real possibilities for consumer-level sustainability and waste reduction/elimination, share your thoughts… I’d love to hear them.